Nigeria reboot their World Cup with 2-0 win over Iceland 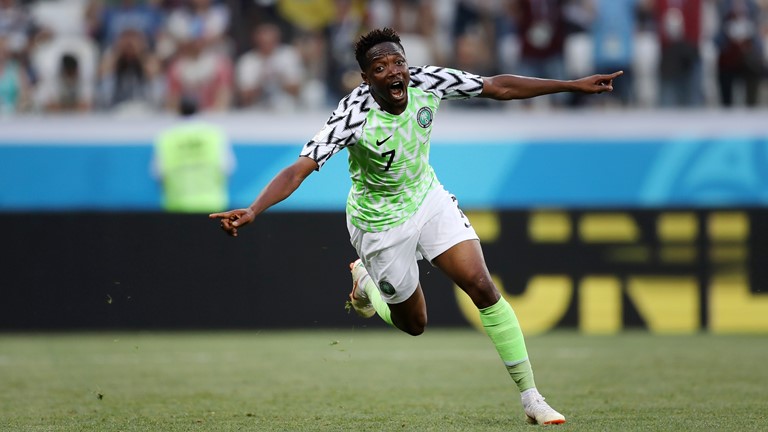 VOLGOGRAD, June 22: A revamped Nigeria beat Iceland 2-0 and revived their hopes of advancing in the World Cup in Russia on Friday with, striker Ahmed Musa celebrating his return to the team with two fine goals.

The defeat for Iceland, appearing in their first World Cup tournament, does not kill off their dreams just yet, while struggling Argentina could also pull off a miraculous escape and make it to the knockout rounds.

But Friday’s win, in the heat of southern Russia, leaves Nigeria in control of their destiny when they meet Argentina in their final game of Group D on Tuesday.

A draw might be enough for the Super Eagles, who now hold the group’s second qualifying spot, even if Iceland beat already-qualified Croatia, depending on goal difference.

Argentina, meanwhile, have to beat Nigeria and also hope Iceland do not win against Croatia, as that could send the South Americans home early, again depending on goal difference.

Nigeria will be looking to avoid all these calculations by beating Lionel Messi and his compatriots outright, however.

“We will play to win the game,” Nigeria’s German coach Gernot Rohr said.

“We played them in a friendly but there was no Messi then,” he said, referring to Nigeria’s 4-2 victory in a friendly in November when Messi was absent. “We know we can do it, our confidence is coming back.”

In only the second win for an African side in the Russia World Cup so far, Nigeria broke a stale deadlock in the 49th minute when wing-back Victor Moses lofted a pass towards Musa who deftly controlled the ball and smashed in the half volley.

Musa was on the bench for Nigeria’s limp defeat to Croatia in their opening World Cup game, and the announcement of the Leicester City striker’s name in the starting team on Friday drew thunderous cheers from Super Eagles fans.

He hit the bar shortly before making it 2-0 in the 75th minute when he used his pace to beat Iceland defender Kari Arnason and rounded goalkeeper Hannes Por Halldorsson before slamming the ball into the net.

Iceland, who caused one of the biggest upsets in the tournament so far by holding two-time champions Argentina to a draw on Saturday, showed their trademark grit to stay in the game and won a penalty.

Referee Matt Conger used the Video Assisted Referee system to confirm that striker Alfred Finnbogason had been fouled by Tyronne Ebuehi in the 80th minute.

But playmaker Gylfi Sigurdsson, Iceland’s most gifted player of his generation, blasted his kick high over the bar.

CHANGES BRING SPEED
The win vindicated the decision of Nigeria’s German coach Gernot Rohr to overhaul his attack after the 2-0 loss to Croatia, bringing in Musa and Kelechi Iheanacho at the expense of strikers Odion Ighalo and Alex Iwobi.

He used three central defenders flanked by wing backs, including Moses who usually plays in attack for Nigeria, and persuaded John Obi Mikel to play deeper in midfield.

“They did this for the country, for the team. It was not easy to convince them but in the end they did it well. It gave us more space and the speed proved decisive for us,” Rohr said.

Iceland, the smallest country ever to play in a World Cup, were roared on by their travelling army of their fans.

But they missed the pace of winger Johann Berg Gudmundsson who was injured in the Argentina game.

Coach Heimir Hallgrimsson said things had been going to plan at halftime with the score 0-0. But Volgograd’s heat, with temperatures around 30 degrees Celsius (86°F), sapped his team.

Iceland must now turn their sights on Croatia who ended the island’s 2014 World Cup dream in a playoff, and the relationship between the sides on the field has often been tempestuous.