NIBL inks merger deal with MBNL, after failure to merge with Himalayan Bank 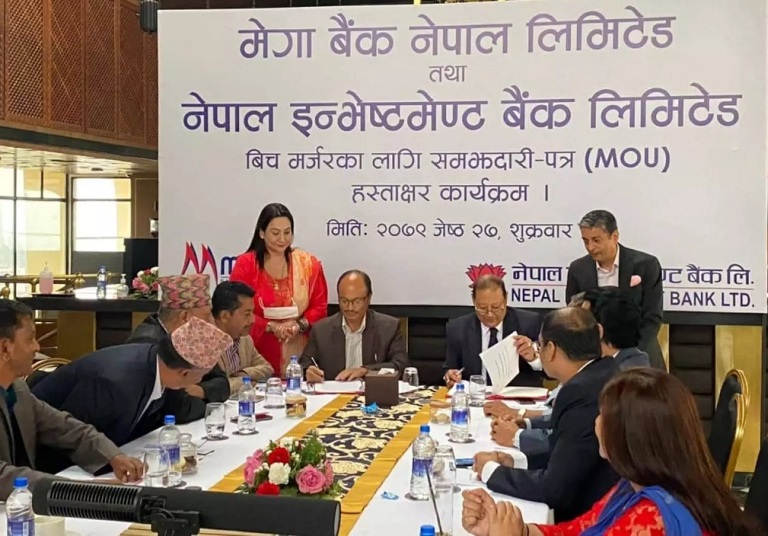 NIBL Chairman Prithvi Bahadur Pande and MBNL Chairman Bhoj Bahadur Shah, in this regard, inked an agreement. The swap ratio of MBNL and NIBL is set to be fixed at 100:90.

Pande will chair the unified entity while Jyoti Pandey, the present CEO of the NIBL, will be placed as the chief executive officer. The merged bank will be named ‘Nepal Investment Mega Bank Limited,’ according to a joint press statement issued by both the banks.

Earlier, NIBL and Himalayan Bank Limited (HBL) attempted to get merged, which however failed at the last hour of the merger process. Finance Minister Janardan Sharma and HBL’s former chairman Tulasi Prasad Gautam were even dragged into controversies for this failure.

After the merger between NIBL and HBL went inconclusive, Nepal Rastra Bank has been pressing both the banks to find suitable partners to go into a new merger process. While NIBL has found a partner, HBL is yet to disclose its development.

Currently, NIBL has a paid-up capital of Rs 18.31 billion while that of MBNL is Rs 16.12 billion. If the merger process concludes as per plan, the merged bank will have a capital base of Rs 34.43 billion.

KATHMANDU, Oct 3: The Nepal Investment Bank Limited (NIBL) has announced to provide Rs 10 million to the State for... Read More...