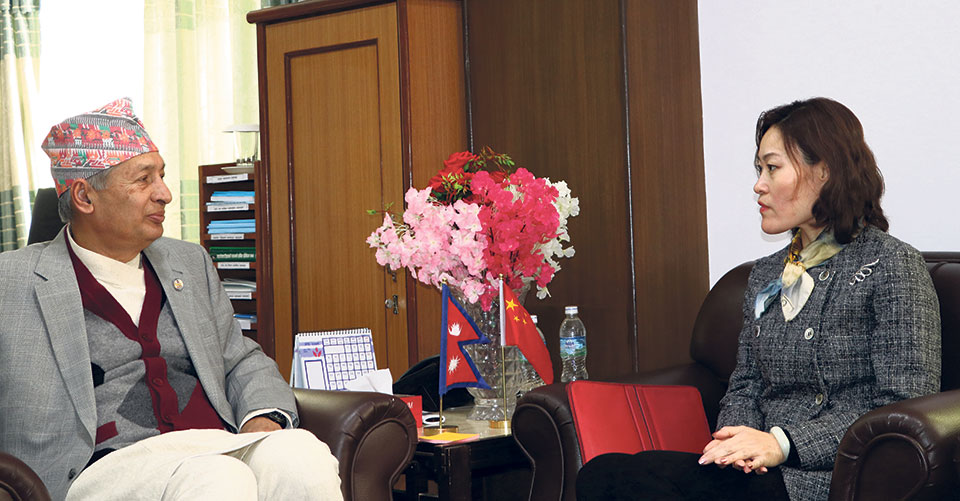 Speaking at a meeting with Chinese ambassador to Nepal, Hou Yauqi, at the finance ministry on Sunday, Minister Khatiwada highlighted importance of such routes, including Kora La in Mustang, for enhancing Nepal’s connectivity.

Kora La trade route is one of the shortest in Nepal to connect India and China. The opening of cross-border road networks is expected to boost Nepal’s trade and bring more tourists from China.

China has already readied necessary infrastructure on its side. But nothing concrete has been done on the Nepali side.

The Kodari trade route, which was closed after the 2015 earthquakes, has yet to open. However, both the governments have agreed to reopen it at the earliest.

The government has accorded top priority on north-south roads that connect China and India. Similarly, it is hopeful that enhanced north-south connectivity with boost its bilateral as well as multilateral trade.

Khatiwada also said that both Nepal and China need to join hands for discouraging informal trade between the two countries. He also requested ambassador Yauqi to do the needful for opening a branch of Chinese bank in Nepal so that bilateral trade is done through a formal banking channel.

Though the two governments have discussed the issue of opening a branch of Chinese bank in Nepal, it is yet to materialize.

Speaking in the meeting, ambassador Yauqi said she was hopeful that the government with two-thirds majority will achieve progress in development in the coming years. Yauqi also expressed commitment to assist Nepal for economic development as well as prosperity.

Khatiwada also requested the Chinese envoy to attract more Chinese investors in the Nepal Investment Summit 2019 scheduled to be held on March 29-30.

Ambassador Yauqi has expressed commitment to bring more Chinese tourists to Nepal. She also said that China will continue to support Nepal in infrastructure development, tourism, agriculture and projects related to earthquake reconstruction. The ambassador also requested Khatiwada to look into issues related to taxation of goods imported to Nepal for development projects by implemented using Chinese assistance.

KATHMANDU, Feb 6: Various studies show that 1 percent increase in the stock of infrastructure is associated with a 1 percent... Read More...

Violence against women sees spike in Suklaphanta Municipality
42 minutes ago