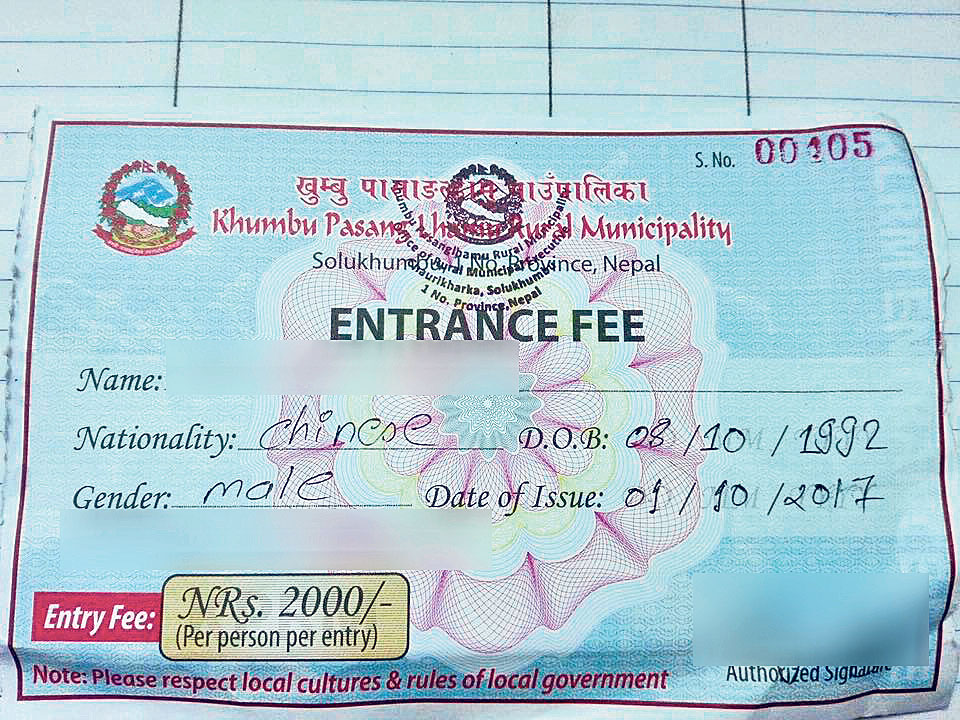 The rural municipality has said that it started levying entrance fees for foreign nationals as per a decision taken by the meeting of its executive council held on July 19.

Different tourism organizations based in Kathmandu had piled pressure on the rural municipality not to levy additional entry fee on foreigner, but to no avail.

Issuing a public notice on October 3, the municipality said that Trekkers Information Management System (TIMS) card issued by Trekking Agencies’ Association of Nepal (TAAN) and Nepal Tourism Board (NTB) will no longer be valid. Referring to TAAN, it also requested all foreigner and trekking guide to contact its office if any organization requests them to provide details of trekkers in an unauthorized manner.

However, TAAN, issuing a statement on October 1, said that the rural municipality didn’t live up to its commitment of postponing the implementation of new entrance fee by 45 days that it made during a tripartite meeting with NTB and TAAN on September 26. “In the meeting, the rural municipality had agreed to not levy any entrance fee for the time being and find an alternative within 45 days. We had agreed to find out an alternative after redefining the constitutional provision regarding fee to be levied on tourists,” he said, adding: “I signed the minute of the meeting and left.

Later I discovered that other two sides didn’t sign the minute.” He also said that the representatives of the NTB and the rural municipality left the meeting, agreeing to hold another round of meeting to settle the issue.

Rijal also said that the meeting had also decided to release certain percentage of TIMS revenue to the rural municipality until an alternative is found.

KATHMANDU, April 8: A tea tasting event was conducted at the Everest region on Saturday as part of the ongoing Third... Read More...

KATHMANDU, Feb 19: The government has brought the Directive on the Foreign Exchange Facility Recommendation for the Hydropower Projects- 2018 into... Read More...