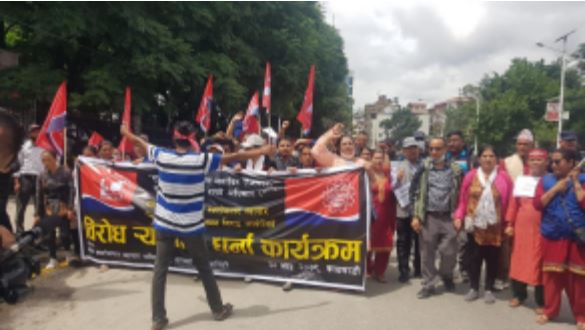 KATHMANDU, Jan 7: Nepal Street Vendors' Unions (NEST), with support from StreetNet International, is preparing to organize a mass protest across Kathmandu on Monday against the Kathmandu Metropolitan City (KMC)’s “clean-up” operation that has threatened the livelihood of more than 34,000 street vendors.

They are up against the Mayor Balendra Shah’s move to remove the street vendors without making any alternative arrangements for them.

Issuing a statement on Saturday, the union said that the street vendors of Kathmandu are organizing the mass protest on January 9 seeking access to public space and their right to work.

According to the statement, it will be mobilizing its members across Kathmandu for a mass protest to push back against the evictions and harassment affecting 34,000 street vendors in the city who have been suffering for months from a “clean-up” operation by Mayor Balendra Shah.

The global alliance of street vendors, StreetNet International, has also backed the move of NEST, urging workers’ organizations across the world to stand in solidarity with NEST and defend their right to work and their right to the city.

StreetNet International in a statement said that the KMC has adopted discriminatory urban policies against the working poor.

“After Balendra Shah was elected as Mayor of Kathmandu, he instructed the Metropolitan Police to clear all areas from the presence of street vendors, which resulted in a daily experience of violence for our members. In Kathmandu, street vendors have been banned from their usual places of business and are unable to work for months. This has resulted in loss of incomes and livelihoods,” the statement said.

The statement further said that Human Rights Watch has documented the assault on the rights of the urban poor taking place in Kathmandu, which is threatening up to 34,000 vendors in the city, many of whom are women who have no other alternative source of income or employment.

The main objective of the protest is to demand the authorities to respect the right to work freely and to occupy public spaces as citizens.

“One of the various pressure strategies we put in place to protect the rights and interests of the street vendors is organizing a strong, public demonstration,” says Maya Gurung, leader of NEST and member of StreetNet International Council. “In Nepal, many protests have been planned thanks to NEST for two decades, but the state has never been serious about the creation of policies and laws in favor of street vendors. “Gurung further said that they will be protesting against the repressive behavior of Kathmandu Metropolitan City on January 9, coinciding with the 21st anniversary of NEST, and said, “Everyone is welcome to participate.”

When will the blocked sewer under the KMC office be cleared?

KATHMANDU, July 20: The plan to clear a sewer under the office of the Kathmandu Metropolitan City (KMC) is going... Read More...