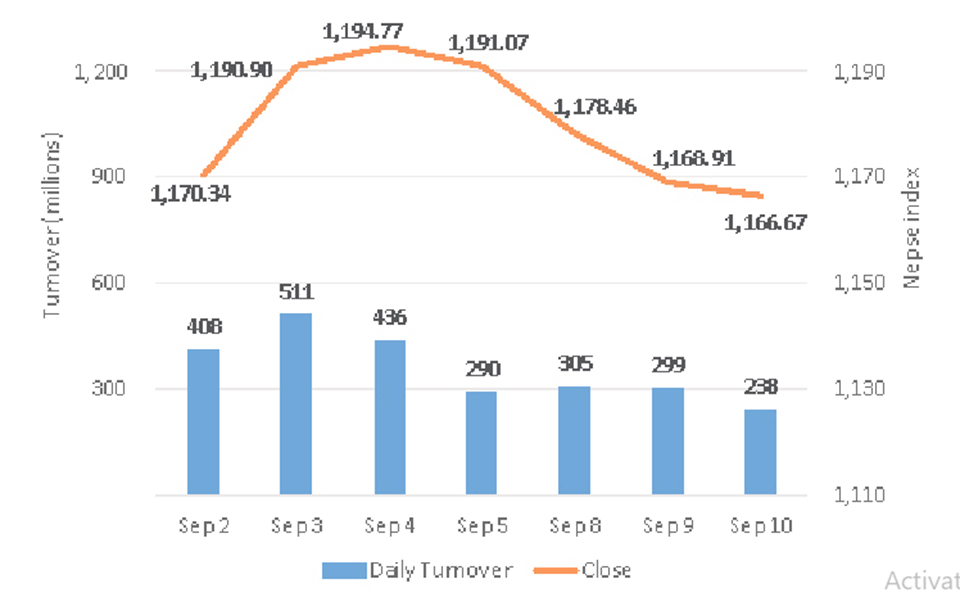 KATHMANDU: Market witnessed a slightly volatile session on Tuesday with Nepal Stock Exchange (Nepse) index flipping between gains and losses. After trading flat initially, the benchmark index came under some pressure giving up more than 7 points by midday. Stocks then made a comeback to recoup earlier losses and traded almost 4 points higher late in the afternoon. Nonetheless, a small pullback toward the close saw the index post a marginal loss of 2.24 points to end the day at 1,166.67 points.

Nepse stretched its losing streak for fourth straight session with Tuesday's loss. However, since the prices are already at some of the lowest levels, the selling pressure seemed somewhat muted. Market participation also dropped with the bourse posting a subdued turnover of Rs 238 million – the lowest since late March.

Sub-indices mostly favored negative territory with eight out of 12 traded sectors closing the day in red. Hotels stocks bucked the trend as the group's sub-index jumped up by 1.52%. Non-life Insurance and Mutual Fund sub-indices also added at least 0.5% each. Development Bank segment also eked out marginal gain. On losing front, Hydropower stocks continued to suffer as the group's sub-index fell by 0.82%. Manufacturing & Processing, Finance, and Life Insurance sub-indices were also down by 0.67%, 0.52%, and 0.5%, respectively. All other sectors saw modest drops.

Kumari Bank Ltd and NIC Asia Bank Ltd were the most actively traded scrips of the day with turnovers of over Rs 12 million each. Both commercial banks will be closing their shareholders book on September 15 for the purpose of convening respective Annual General Meetings (AGMs). While Kumari Bank has announced 10% bonus shares, NIC Asia Bank has proposed to distributing 10% bonus shares and 11% cash dividend to its shareholders. Next, Nepal Life Insurance Company Ltd posted a turnover of more than Rs 10 million, followed by Agriculture Development Bank Ltd and Nepal Bank Ltd which logged turnovers of Rs 9 million and Rs 8 million, respectively.

Among advances, energy scrips led the list of gainers with both Himalayan Urja Bikas Company Ltd and Mountain Hydro Nepal Ltd seeing their share prices rally by over 6% each. Similarly, share prices of Nabil Equity Fund and Shangrila Development Bank Ltd were up by 5% and over 4%, respectively. United Insurance Company Ltd, Nepal Agro Laghubitta Bittiya Sanstha Ltd and Summit Laghubitta Bittiya Sanstha Ltd also added over 3% each on their share prices.

On the other hand, Central Finance Co Ltd and Arun Kabeli Power Ltd's shares came under hammer as their press fell by 4% on the day. Similarly, share price of Kanchan Development Bank Ltd tumbled by almost 4%, while Universal Power Company Ltd, Nadep Laghubitta Bittiya Sanstha Ltd and Dibyashwori Hydropower Ltd, among others, saw their respective share prices fall by 3% each.

In corporate space, Securities Board of Nepal (Sebon) has permitted Sunrise Capital Ltd to introduce its first mutual fund scheme. The merchant banker will be issuing mutual fund worth Rs 1 billion.

As per ARKS technical analysis, the market formed a bearish spinning top candlestick on the daily timeframe, indicating lack of conviction in the session. However, with four straight days of losses, sentiment remains bearish in the present context. Technical indicators are also sloping downward indicating additional downfall likely. However, the support of 1,160-point has held ground. Hence, Nepse's movement in the current zone might suggest plausible movement of the benchmark index in the short run.

KATHMANDU: Stocks began Thursday’s session on a positive footing and mostly traded in green in the morning when the benchmark... Read More...

IPOs worth Rs 1.21 billion to be issued
5 minutes ago