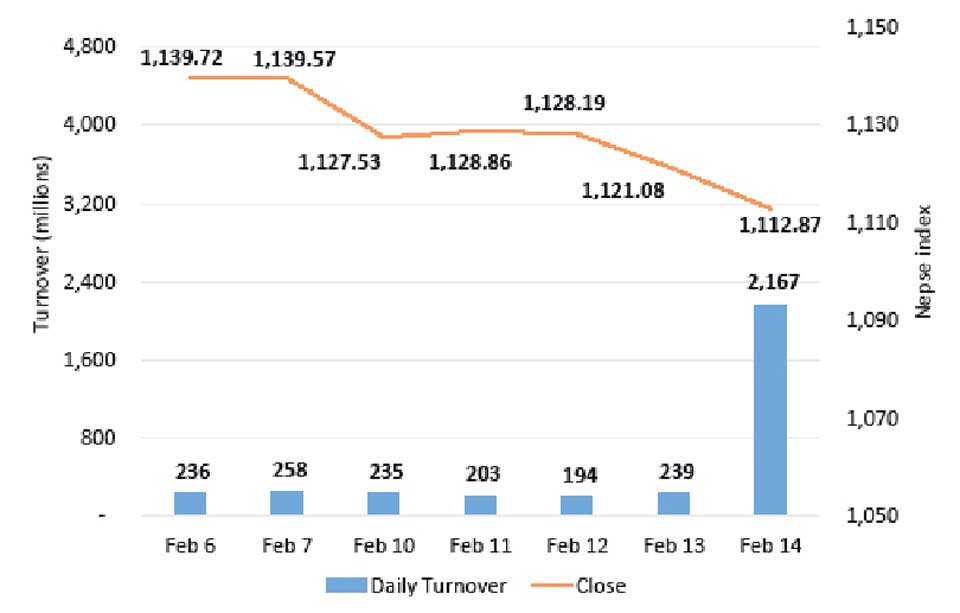 KATHMANDU: The Nepal Stock Exchange (Nepse) dropped to three-year low of 1,112.87 points on Thursday as stocks carried over weaknesses to the last trading day of the week. The benchmark index shed more than 8 points in the first half of Thursday’s session and then wavered throughout the latter trading hours.

With Thursday’s decline, Nepse is now trending more than 40 percent down from its all-time high of 1,881.45 points reached in July, 2016. The local bourse recorded a total turnover of over Rs 2.16 billion on the day. Everest Bank Ltd Promoter Share accounted for almost 90 percent of the daily turnover. Besides this, market activity remained fairly subdued.

All major trading sectors ended the day in red. Hotels sub-index was down 1.57 percent. Further, Non-life Insurance, Microfinance and ‘Others’ scrips also suffered as their respective sub-indices went down by more than 1 percent. The sub-indices of Manufacturing & Processing and Hydropower scrips followed suit posting loss of 0.94 percent and 0.77 percent, respectively. Bellwether banks also struggled as reflected by a decline of 0.59 percent in the group’s sub-index.

KATHMANDU: Stocks began Thursday’s session on a positive footing and mostly traded in green in the morning when the benchmark... Read More...