Nepse inches lower in the week after failed recovery attempt 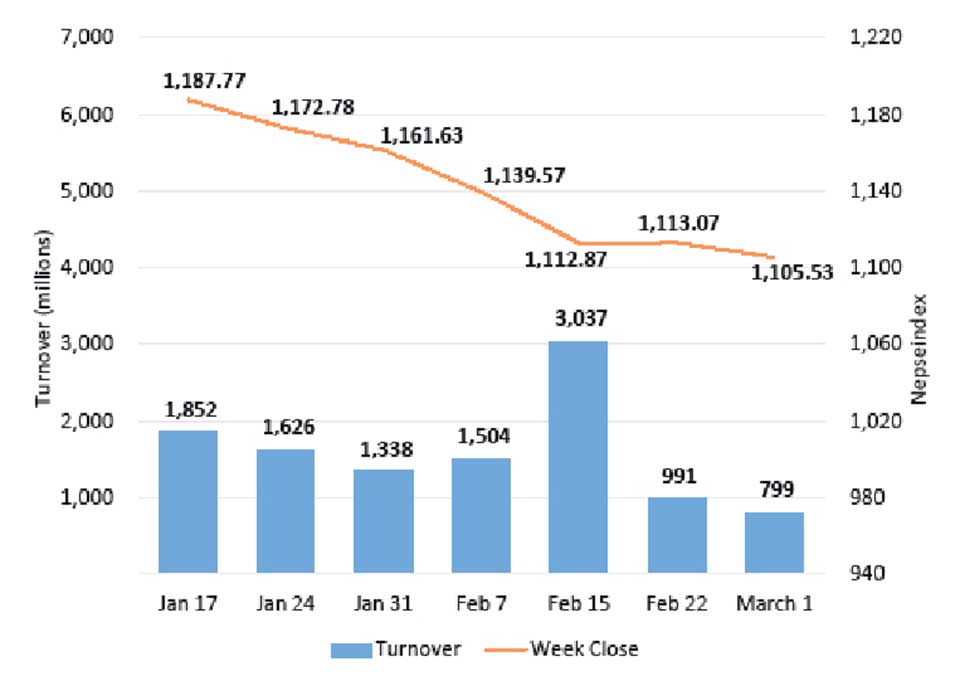 KATHMANDU: Local equities opened the week on a fragile note as the Nepal Stock Exchange (Nepse) index dropped more than 10 points on Sunday. Monday saw a gain of 7.41 points but the index gave up most of its gains on Tuesday as it pared 7.17 points.

The secondary market, subsequently, made a modest recovery on Wednesday as the index added 2.97 points. The market remained closed on Thursday. Overall, the index shed 7.54 points or 0.68 percent in the review period to settle at 1,105.53 points.

The benchmark index snapped its losing run in the previous week eking out marginal gain. However, Nepse failed to add to previous week's gains and returned to its losing ways.

Nepse hovered between a confined range in the week's trading days showing some sign of steadying after a sustained downward movement. The index, which hit 1,102 points twice in the week, also posted rebounds from the respective level. Hence, some support is seen at around psychological level of 1,100 points.

Class 'A' stocks also closed lower in the week as reflected by a loss of 0.76 percent in the Sensitive index. Further, most of the traded sectors came under pressure, barring Manufacturing & Processing sub-group. The segment's sub-index jumped 1.27 percent higher.

Among the indices closing in the red, Hotels sub-index saw the biggest loss of 2.18 percent. Microfinance stocks also suffered as the group's sub-index sank almost 2 percent.

In terms of market participation, Nabil Bank Ltd witnessed the highest weekly transaction worth Rs 47 million. The second largest commercial bank by market cap closed its shareholders' book on Tuesday for its Annual General Meeting (AGM) due to be held on March 11.

In the news, United Insurance Company Ltd conducted its Special General Meeting (SGM) in the week. The meeting approved the issuance of 240 percent right shares to the company's shareholders. After the issuance, the insurer's capital will reach the requirement mark of Rs 1 billion. Besides, Chautari Laghubitta Bittiya Sanstha Ltd has declared its Annual General Meeting (AGM) on March 30. Expansion of the microfinance's coverage by promoting itself to national level is one of its key agendas. The company is currently operating in 15 districts.

As per the ARKS technical analysis, the market formed a bearish candlestick on the weekly timeframe. Furthermore, weekly technical indicators also indicate the market witnessing weakness in the current scenario as the index has registered a drop more than 80 points in the first two months of 2019.

Nonetheless, the equity market has been trying to consolidate above support level at 1,100 points mark. Hence, a bounce from the current zone might see the index post some upward movement in the short run.