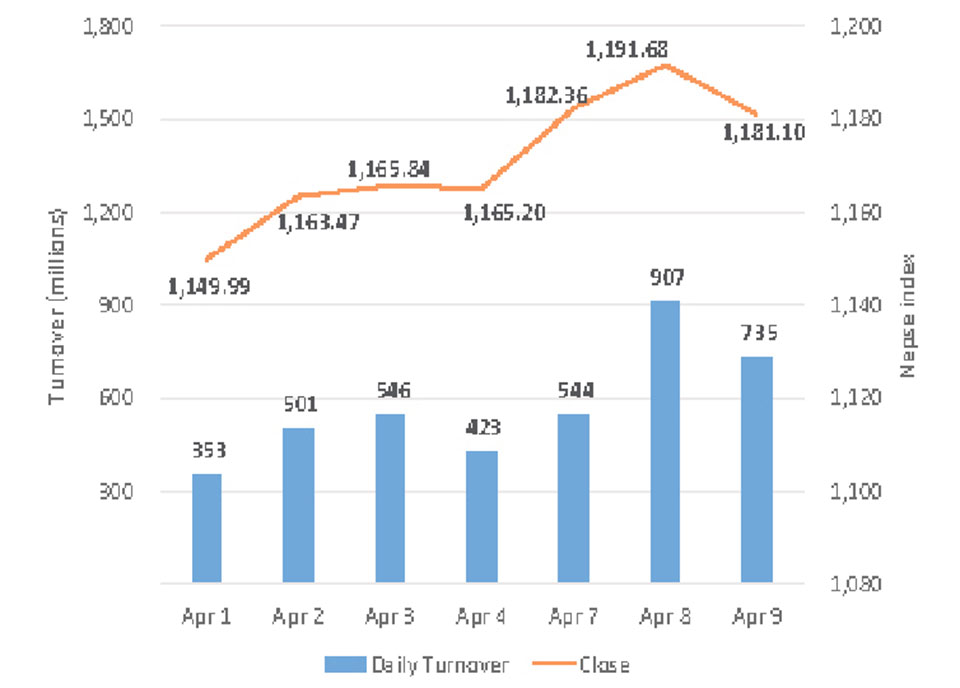 KATHMANDU, April 10: Nepal Stock Exchange (Nepse) ended in red on Tuesday despite trading marginally higher in the afternoon session. Though the benchmark index initially posted move to the downside, stocks witnessed some strength after midday and traded marginally higher in the afternoon. Nonetheless, the benchmark index closed the day 10.58 points, or 0.89 percent lower, at 1,181.10 points.

Weakness in the secondary market can be attributed to profit-booking by investors after a rally of more than 50 points in the previous weeks. Consequently, the index wiped all of its previous day's gains as selling pressure was witnessed in all the traded sectors. Investors, meanwhile, continued to trade actively as the exchange recorded transactions of over Rs 735 million on Tuesday.

Manufacturing & Processing sector led the day's broad fall as its sub-index fell by 1.77 percent. Next, insurance stocks corrected firmly as sub-indices of Non-life Insurance and Life Insurance segments were down by 1.58 percent and 1.37 percent. While Microfinance sub-index shed over 1 percent, Banking stocks also eased after a sustained rally. The group's sub-index retraced by 0.88 percent. All other sub-indices ended the day in red.

Neco Insurance Co. Ltd was the most actively traded stock on the day as more than Rs 64 million worth of the insurer's shares were traded on the day. Subsequently, Kumari Bank Ltd Promoter Share and NIC Asia Bank Ltd registered turnover of over Rs 57 million and Rs 53 million, respectively. Promoter shares worth over Rs 38 million of Garima Bikas Bank changed hands on the day, while Nepal Bank Ltd and NMB Bank Ltd logged transaction of Rs 37 million and Rs 33 million, respectively.

Among gainers, Nepal Community Development Bank Ltd posted the biggest percentage gain of the day as its price rallied by almost 10 percent. Next, Unnati Microfinance Bittiya Sanstha Ltd and Sindhu Bikash Bank Ltd saw their share prices surge by over 5 percent each. Energy stocks followed suit as share prices of Ankhu Khola Jalavidhyut Company Ltd and Rairang Hydropower Development Company Ltd climbed 3.85 percent and 2.17 percent higher, respectively.In contrast, shares of Joshi Hydropower Development Company Ltd and Ghalemdi Hydro Ltd suffered. Share prices of both hydropower developers tanked by over 8 percent each. NMB Microfinance Bittiya Sanstha Ltd's stocks also struggled and fell by over 7 percent. Other companies finishing the day in red were Panchakanya Mai Hydropower Ltd, Shivam Cements Ltd and Taragaon Regency Hotel Ltd which saw their respective share prices fall by 6.03 percent, 5.77 percent and 4.03 percent.In corporate space, Kamana Sewa Bikas Bank Ltd has decided to provide 1.50 percent bonus shares and 8 percent cash dividend to its shareholders for FY 2017/18. However, Nepse has suspended the scrip's trading on the ground of delayed information on the matter. The development bank held its board Meeting on April 7, whereas it notified Nepse on April 9.

ARKS technical analysis indicates the market forming a bearish engulfing candlestick pattern on the daily timeframe which suggests seller's dominance and possibility of a reversal. Relative Strength Index (RSI) has also dropped from the overbought zone, indicating the market losing momentum. However, if the downward movement is not substantiated by a lower close in the coming session, the market might see another surge towards 1,200 points.

Over 1,000 cargo trucks stuck at Nepal-China border points
20 hours ago

Nepal got rid of load-shedding not only due to Ghising’s sole efforts: Minister Gyawali
5 hours ago

What will South Asia look like after the pandemic?
7 hours ago

Nepal got rid of load-shedding not only due to Ghising’s sole efforts: Minister Gyawali
5 hours ago

Govt ready to amend constitution on the basis of justification: PM Oli
9 hours ago