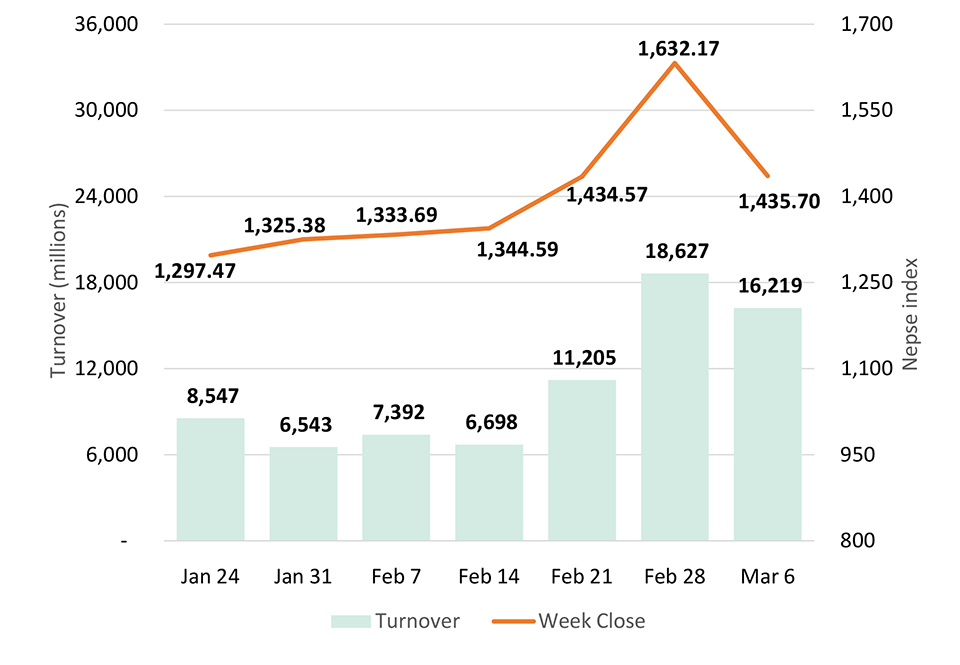 KATHMANDU: The local equity market began the week on a negative footing as the Nepal Stock Exchange (Nepse) index saw a loss of over 40 points on Sunday. The index stretched its losing spree further, with the index dropping over 96 points on Monday, hitting the negative circuit of 6%. The major average found some footing in Tuesday's volatile trading session with the index closing 14 points higher. Another slump followed on Wednesday where the market lost over 68 points, while Thursday was marked by a modest 5.5 points drop. Consequently, the index saw its biggest weekly loss of 196.47 points or 12.04% to end at 1,435.70 points.

Following a rally of almost 200 points in the week earlier, buyers showed sign of exhaustion with sellers dominating market for the entire week, where the bourse gave up all of its prior-week gains. Market participants attribute the slump to profit booking along with fear of effect of the worldwide outspread of coronavirus in Nepali economy. Meanwhile, many are of the view that the drop is one of the major corrections which usually happens after a large rally. Nonetheless, indecision prevails in the equity market of late. The market continued to witness active market movement as more than Rs 16 billion worth of securities were traded in the week on review.

Class 'A' stocks also saw movements in correlation with the broader market resulting in an 11% fall in the Sensitive Index. Most of the sectors saw heavy losses in the day with Microfinance and Non-Life Insurance sub-indices giving up 16% and 15%, respectively. Further, Life Insurance, Hotels and Banking sectors also came under the hammer with losses of roughly 12% each. All other sectors succumbed to the week's broad bearish movement.

In major market related news, Nepal Rastra Bank (NRB), in its mid-term monetary policy review, said that all microfinance institutions must separate funds for consumer protection from the respective dividends in excess of 20% mark which will slightly curb the dividend distribution amount of such institutions. Though the directive will have a minimal impact on shareholder return, the entire segment took a greater than expected knock as the overall market slide helped fuel the downfall further.

ARKS technical analysis suggests the market forming a large bearish weekly candlestick as the index pulled back sharply from its multi-year highs at around 1,630 points. Subsequently, weekly technical indicators suggest that the momentum is losing some steam after five straight weeks of gains. If the slump persists breaking its support at 1,390 to 1,400 points zone, further bearish movement can be expected. On the other hand, a rebound in the coming weeks might see the index test its previous immediate high of 1,632 points mark where a breakout will help the market stretch rally further.

KATHMANDU: The Nepal Stock Exchange (Nepse) index opened the week on a slightly bearish footing as it gave up over... Read More...