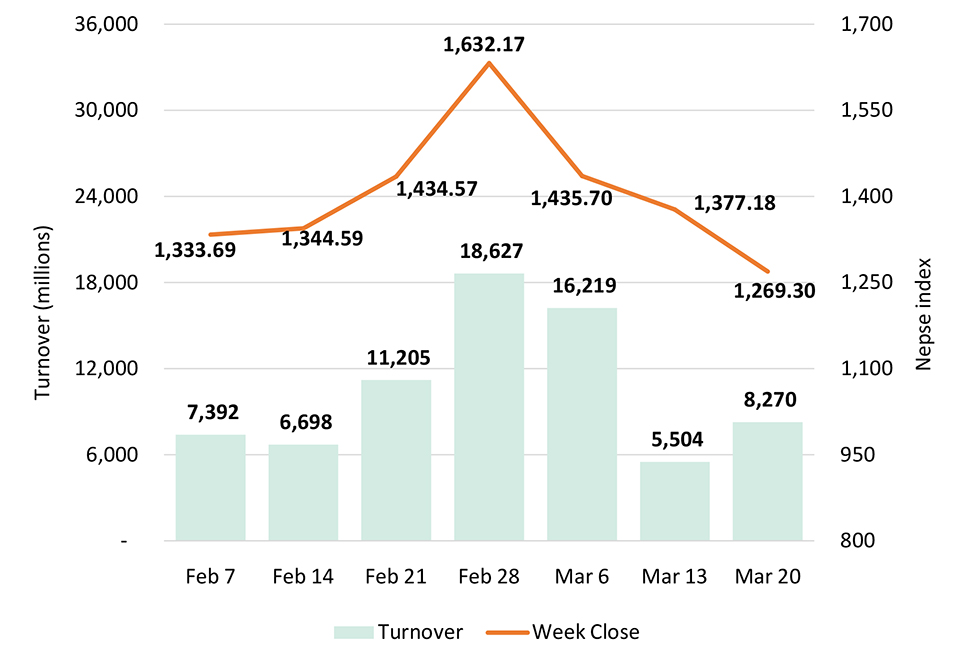 KATHMANDU: Substantial weakness was visible in the equity market in the start of the week's trading. The Nepal Stock Exchange (Nepse) index tanked over 64.14 points on Sunday as investors continued to flee the secondary market. The selling pressure eased of slightly on Monday as the bourse gained some footing with a 3.36 point gain. Nonetheless, heavy losses continued with Tuesday, seeing a decline of 44.33 points and Wednesday, following with a 16.27 points drop. A gain of 13.5 points helped the benchmark index trim its week's losses but that could not prevent the index from maintaining a notable negative bias. Loss tally in the review period stood at over 107.88 points or 7.83% as Nepse closed at 1,269.31 points.

The decline in the review period marks a third straight week where the index ended lower. Consequently, the major average is in the verge of posting its worst month ever as the index has recorded a drop of over 360 points since the start of March. Investors still remain skeptic over the impact of COVID-19 outbreak while the national government has started taking precautions against the disease in the country. In the week, the government ordered shutting down of gyms, clubs, movie theatres and alike to curb any possible spread of the disease. Similarly, the government has also discouraged gathering of more than 25 people in one place at a time.

For the equity market, Sebon has ordered broker houses to stop displaying live prices and also limit the number of visitors to a maximum of five people at a time. Further, online trading and trading via phone calls has been encouraged. In such a scenario, the local bourse might see some drop in volumes. Speculators are expecting a temporary shutdown of the equity market, but no official word is out from the concerned bodies yet. Total turnover in the week was Rs 8.27 billion.

In the technical front, the sentiment remains firmly bearish with the formation of three straight red candlesticks on the weekly timeframe. Both weekly Moving Average Convergence Divergence (MACD) and Relative Strength Index (RSI) which gauges the current trend and momentum of the market indicate that bears are dominant in the current juncture. Given the support of 1,200-1,220 points zone remains intact, some range bound or upward movement can be expected. However, the index is yet to see a major rebound that can act as an impetus for a notable reversal from the current sharp downtrend.

KATHMANDU: The secondary market faced indecision throughout the trading session on Thursday. The last trading day of the week started... Read More...