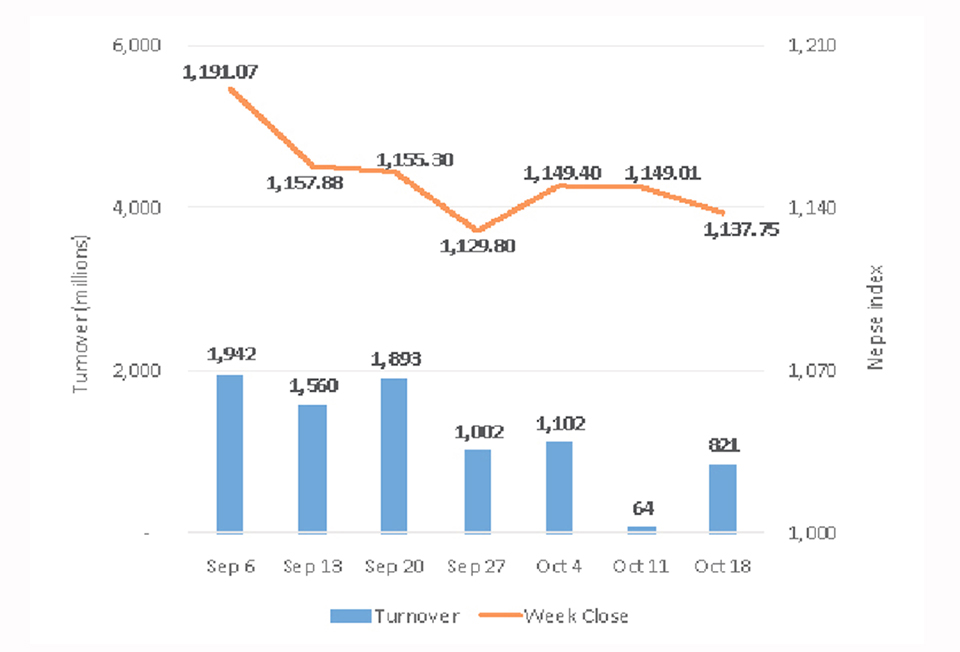 KATHMANDU: The Nepal Stock Exchange (Nepse) index broke its 10-week losing run ahead of Dashain holidays with a weekly gain of almost 20 points. Subsequently, the exchange opened only on Thursday in the holiday week where the index ended essentially flat.

However, this week the bourse failed to extend its pre-holiday strength with the stocks remaining slightly under pressure. Losses and gains came in alternate days with Monday and Wednesday witnessing declines of 12 points and 5 points, and Tuesday and Thursday registering 5 point and 1 point advances. Overall, the index shed 11.26 points or 0.98% in the week to settle at 1,137.75 points.

Despite the index dropping slightly post-holidays, the relentless downward movement now seems to have lost steam. The index is also firmly holding ground above its 52-week low of 1,123 points hit on mid-September giving some hope to investors for a reversal from the persisting downtrend. Further, most commercial banks announcing higher dividends this year compared to their last-year payouts has also helped the market counter the recent downfall. Besides, performance of the market heavyweight banks in the first quarter can act as a major catalyst to the equity markets revival. With the market ranging sideways, market participation also remained modest.

Average daily turnover in the review period stood at just over Rs 200 million.

Class 'A' stocks also suffered as reflected by a 1.12% dip in the Sensitive Index. On the sectoral front, most of the sub-groups turned red. Only Mutual Fund and Hydropower sectors ended the week higher. Hotels sectors were the major laggards as the group's sub-index tanked 2.79%. Next, Banking sub-index dropped 1.24%. However, the drop can be attributed to short term selling pressure witnessed by most banks as investors resorted to selling such shares after realizing dividends. 'Others' sub-index also dropped over 1%. Besides, all other sub-indices closed the week marginally lower.

ARKS technical analysis indicates the market forming a bearish candlestick on the weekly timeframe. Despite the market showing an initial sign of recovery in the week before holidays, the index gave further ground on the back of low volume sessions witnessed of late. Hence, weekly technical indicators also suggest slight selling pressure prevailing in the current scenario. Nonetheless, a strong support lies at 1,120 points where a volume supported rebound might make way for a notable reversal from the downtrend.

Nepse increases slightly by 4.62 points, while daily turnover drops as low as Rs 1.474 billion on Monday
3 minutes ago

NC will not join Dahal-led govt: Dr Koirala
52 minutes ago