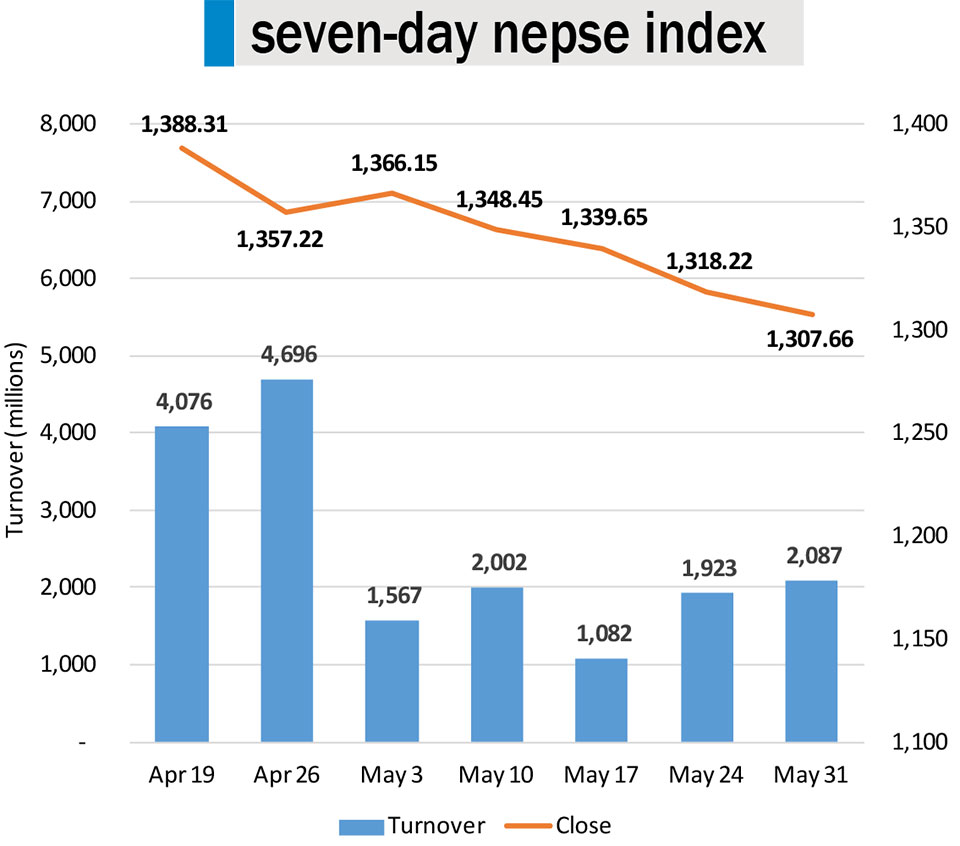 KATHMANDU, June 2: After declining on the first trading day of the week, stocks staged a comeback on the second day as the benchmark index surged more than 35 points on the day. However, despite much anticipation, announcement of government budget failed to uphold market sentiments throughout the latter sessions.

The weekly turnover showed a meager improvement as total transactions amounted to Rs. 2,087 million compared to last week's Rs. 1,922 million. However, market activity persists to stay on the lower side as investors were still in a state of indecision even after the federal budget announcement on Tuesday.

With regards to the capital market, dismissal of any Value Added Tax (VAT) on broker's service charge was the main positive takeaway from the budget. Furthermore, as per the budget, it will also be mandatory for any real sector company with a capital of over Rs. 1 billion to convert itself to public company and have its shares listed in the stock exchange. However, the Capital Gains Tax (CGT) in the secondary market transactions for individuals has been increased to 7.5 percent.

Major sub-indices turned in a mixed performance in the review period. Strength was seen in the trading sector as the Trading sub-index advanced the most closing 0.78 percent higher. Similarly, Insurance and Finance sub-indices jumped 0.75 percent and 0.64 percent, respectively. Banking sub-index saw the highest decline of 1.61 percent this week. Shares of Mega Bank Ltd led the losses in the banking sector as its price slumped for four consecutive days. Hydropower sub-index also lost 1.23 percent.

Stocks of Nepal Bank Ltd were the most active with a turnover of over Rs. 75 million. This week, the commercial bank has applied for approval of its Further Public Offering (FPO) on Securities Board of Nepal (Sebon).

In terms of major news, Nepal Stock Exchange (Nepse) has opened bid on Sunday for the procurement of consulting service to test the automated trading system which will be implemented in the secondary market within short order.

As per the ARKS technical analysis model, the stock market further stretched its losses this week. The index failed to cross the 1,340 mark mid-week and retraced back close to the support of 1,300 points mark. Moreover, Relative Strength Index (RSI) and Moving Average Convergence/ Divergence (MACD) both indicates the index losing momentum as no recent boost in the market is evident. Hence, the index is more likely to test the support of 1,300 points next week which might point out a possible direction for the market in near future.

KATHMANDU, May 22: Nepal Stock Exchange (Nepse) index made a partial recovery on Monday after hitting an intraday low of... Read More...