Nepse down 14 points on first day of the week 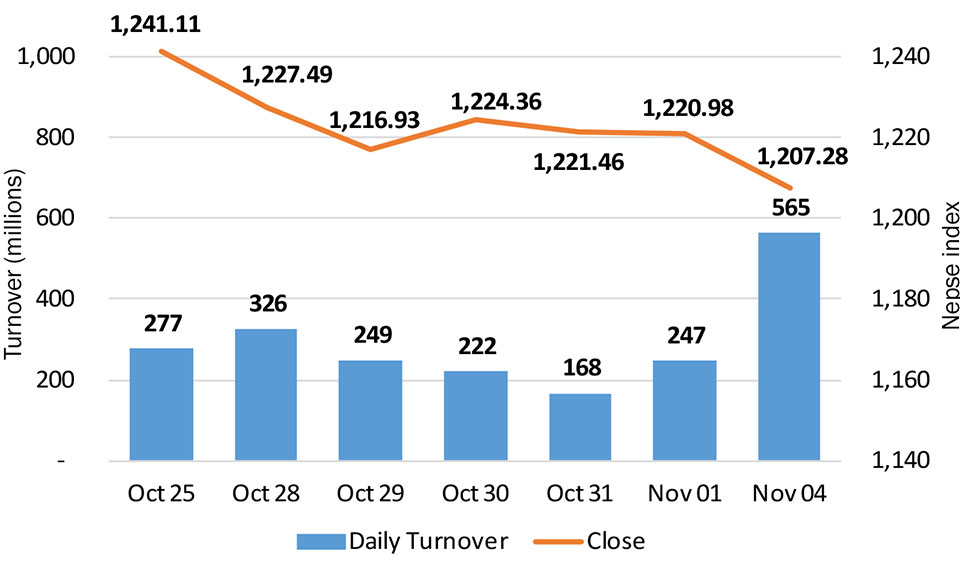 KATHMANDU: Stocks came under pressure in the first trading day of the week. Weakness persisted in the market throughout the day, with the index finally settling at 1,207.28 points, down by 13.70 points compared to the earlier trading session.

Sellers dominated the day even though a few major banking and financial institutions published upbeat earning reports on Sunday. Market activity showed significant increment as the total turnover increased to Rs 564 million, up from Rs 246 million recorded in the earlier trading day. Promoter shares of Machhapuchhre Bank Ltd and Nirdhan Utthan Bank Ltd accounted for almost 50 percent of the bourse's total turnover on the day.

Samata Microfinance Bittiya Sanstha Ltd led the list of gainers as its share price rallied by 7.2 percent on Sunday. Meanwhile, Shine Resunga Development Bank Ltd added 3.06 percent on its share price after the 'B' class bank reported a 48.61 percent rise in its net profit as per earnings report of the first quarter of Fiscal Year 2018/19. Further, Arambha Microfinance Bittiya Sanstha Ltd and National Hydropower Company Ltd were among other top gainers with gains of over 2.5 percent each.

In contrast, share price of Life Insurance Corporation Nepal Ltd slumped by 5.6 percent. The life insurer, which had declared 36 percent bonus shares earlier, amended its proposal to distribute 12 percent bonus shares as per its notice to Nepse. Share price of Everest Bank Ltd also fell by 5.4 percent. The bank had announced 20 percent cash dividend to its shareholders on Friday. Next, Himalayan Distillery Ltd, Deva Bikas Bank Ltd and Nepal Seva Laghubitta Bittiya Sanstha Ltd were the other losing scrips of the day.

As per the ARKS technical analysis, the index closed below its immediate support of around 1,215 points following the recent downfall. Further, technical indicators also suggest momentum shifting toward bears. Next psychological support lies at 1,200 points, the breach of which might see the Nepse drop further to 1,180 points.

KATHMANDU: The sole securities market of Nepal witnessed weakness throughout the trading period on the week’s first day. The Nepal... Read More...

KATHMANDU: Nepali stocks saw one of its best weeks as the Nepal Stock Exchange (Nepse) index closed in green in... Read More...