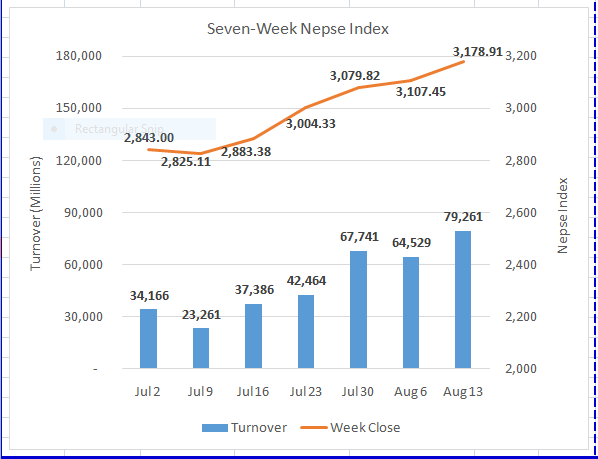 KATHMANDU, August 13: The equity market opened week on a flat note as the Nepal Stock Exchange (Nepse) index added a modest 0.68 point on Sunday. Lackluster trading stretched on Monday as the benchmark climbed another 1.47 points on Monday. Nonetheless, stocks saw strength at mid-week. The broad based index climbed 51.96 points on Tuesday, followed by a minor 0.85 advance on Wednesday. At the final trading day of the week, Nepse rose 16.5 points to end week at 3,162.41. Weekly gain stood at 71.46 points or 2.30%.

The benchmark extended its gaining spree for a fifth straight week with strength seen in hydropower, development bank and finance stocks. Turnovers also remained on the higher side of the spectrum with almost Rs. 16 billion worth of shares being traded daily on average. However, some sectors are yet to see notable interest from market participants ahead of the monetary policy announcement.

Sensitive Index also mirrored the broader market and rose 2.10%. Development Bank, Finance and Hydropower sectors were the major winners of the week with gains of 14.53%, 11.82% and 10.27%. Manufacturing & Processing, Investment and Banking and Life Insurance segments also inched marginally higher. On the other hand, Trading sector fell 5.71%. Further, ‘Others’ and Microfinance sectors slumped over 1% each. Hotels & Tourism and Mutual Fund sectors fell slightly.

In the week, some heavyweight banks reported their financial results of the year 20/21. Overall, earnings have remained upbeat with most of the companies reporting growth in the net profit on year-to-year basis.

As per the ARKS technical analysis, the index formed a weekly bullish candlestick after a consolidation around 3,100 mark and breakout above the psychological level. The index, consequently, made a fresh high to trade close to the 3,200 mark. Momentum indicators also suggest extension of the upward move further. However, some temporary correction might be on the cards following a sustained rally in the past couple of weeks.

KATHMANDU, May 28: The Nepal Stock Exchange (Nepse) index extended gains from prior week as the benchmark rose 32.81 points on... Read More...