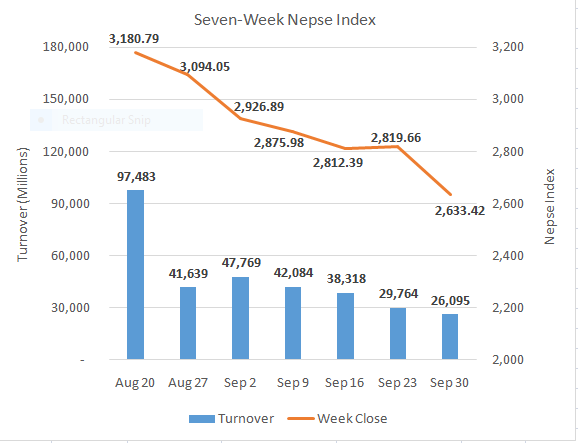 KATHMANDU, Oct 1: After ending in green in the prior week, stocks opened with notable weakness on Sunday. On the first trading day, the Nepal Stock Exchange (Nepse) index fell around 60 points followed by back to back losses of over 70 points on Monday and Tuesday. Though the market tried to gain its footing on Wednesday with a 50-point gain, the benchmark ended the week with a decline of 32 points on Thursday. Overall, the weekly loss stood at 186.24 points or 6.61% with Nepse settling at 2,633.42.

The bourse saw highly volatile trading in the week earlier but managed to close the week in green. After failing to find support at 2,800 mark, the index stretched its downfall with another stock rout ahead of the festive season. However, volumes has dipped firmly reflecting subdued enthusiasm among both buyers and sellers. Turnover also dropped to around Rs. 26 billion in the review period.

Amidst the recent downfall, however, few banks and microfinance have continued to announce dividends which has also been key in determining the respective stock’s movement. This week, Ridi Hydropower Development Company Ltd announced its dividend for the year 20/21. The energy company announced 12.6% cash dividend to its shareholders.

As per the ARKS technical analysis, the index formed a strong bearish candlestick on the weekly timeframe reflecting sellers’ control. A breach of 2,800 support mark has dragged the index firmly towards 2,600 level, which can be taken as the next immediate support. Momentum indicators also suggest possibility of further downward move on the weekly timeframe. However, a consolidation around the current zone and a volume backed rebound can provide opportunities go long in the equity market.

Stocks close in red for a third straight week

KATHMANDU, June 12: Following a gain of 41.37 points in the week earlier, the bourse continued to see upbeat movement since... Read More...