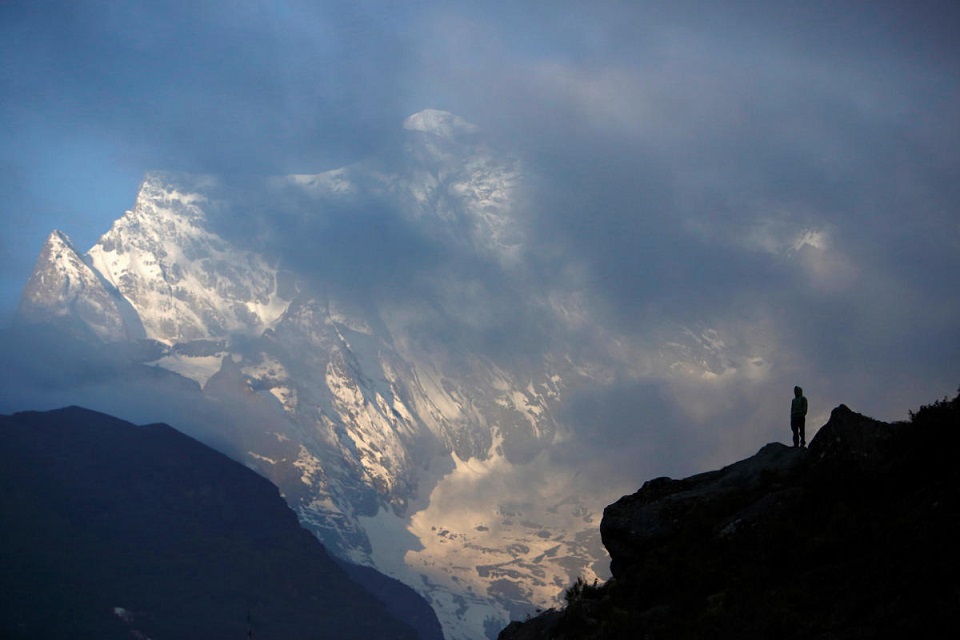 Nepal's climbing guide Tashi Lakpa Sherpa poses for a picture at his home during the lockdown imposed by the government amid concerns about the spread of the coronavirus disease (COVID-19), in Kathmandu, Nepal May 25, 2020. REUTERS/Navesh Chitrakar

KATHMANDU, May 29: Had it not been for the coronavirus, Nepali climbing guide Tashi Lakpa Sherpa would have been on Mount Everest now, guiding clients and trying to add another feather in his cap - a ninth ascent.

But the 34-year-old is sitting in a Kathmandu apartment, worried about his future as a guide if climbing expeditions, a key source of employment and income for the Sherpa guides, remain closed.

Friday is the anniversary of the day Tenzing Norgay, a Sherpa, and New Zealander Sir Edmund Hillary became the first people to climb the 8,850-metre (29,035-foot) high Mount Everest in 1953.

In 2005, at the age of 19, Tashi, who goes by his first name, became the youngest person to climb Mount Everest without bottled oxygen.

Nepal, home to eight of the world’s 14 highest mountains including Everest, suspended climbing and trekking activities in March at the start of the peak summer season because of the pandemic, and its 30 million citizens have been under a lockdown for two months now.

COVID-19, the respiratory disease caused by the coronavirus, is so far known to have infected 1,042 people and killed five in Nepal.

“I can survive and manage my family for one climbing season even without any expedition,” Tashi told Reuters. “But if the crisis drags on and mountains don’t open for long, it will be a great problem.”

Unlike established mountain guides like Tashi, thousands of other Sherpas are facing greater hardship. Many have returned to their villages, hiking officials say.

Sonam Tshering Sherpa, a three-time Everest summiteer, is back in his village, growing potatoes, barley and wheat in less than an acre of land his family owns.

“We can grow only one crop in a year in the mountains, or just enough to feed the family for a couple of months,” Sonam said from Sibuje village.

Sherpas, an ethnic group living in the Everest region of the Himalayas, have always been the backbone of mountain expeditions there, fixing ropes, ladders, carrying loads and cooking. Over the years many from other communities, who have become guides, are also known as Sherpas for the work they do rather than for their ethnicity.

About 200,000 people are employed in expedition and trekking activities in Nepal, according to tourism officials. The pandemic broke out just when they were making final preparations for this year’s March-May summer climbing season.

The autumn climbing season, which is less popular among climbers, lasts from September to November.

A Sherpa guide makes anything between around $2,500 and $16,500 or more, depending on experience, in one Everest expedition.

Ang Tshering Sherpa, who owns a leading expedition organizing company, said Nepal earned about $25 million from expeditions in the 2019 summer climbing season including permit fees, Sherpa payments and other expedition expenses. Figures for previous years and the autumn season were not available, he said.

Garrett Madison, who runs Madison Mountaineering, a U.S.-based company, is however optimistic that expeditions will reopen soon.

“I hope by the Autumn season we can resume traveling and climbing in Nepal,” he said.

KATHMANDU, June 16: The country’s Balance of Payments (BOP) remained at a surplus in the first 10 months of the... Read More...

BANGKOK, May 6: Even as countries moved forward Wednesday with easing their coronavirus restrictions and restarting their economies, a large... Read More...