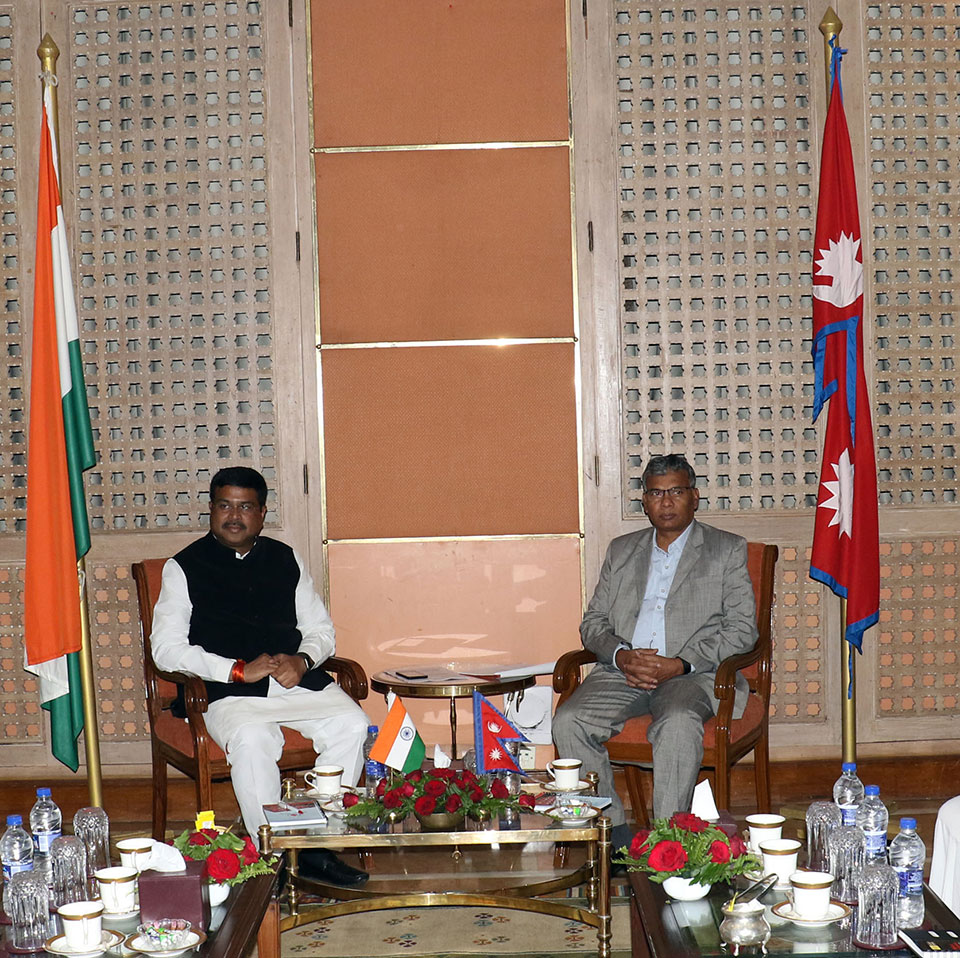 KATHMANDU, Sept 28: A bilateral meeting held between the high level officials of Nepal and India has decided that the gas bullets of Nepal would supply cooking gas (LPG) now onwards.

An understanding to this was reached Friday.

As per the agreement a total of 53 gas bullets would supply cooking gas. At the discussion on Motihari-Amalekhgunj Pipeline Project held in Kathmandu, an understanding was reached between Minister for Industry, Commerce and Supply, Matrika Yadav and his Indian counterpart, Dharmendra Pradhan.

Talking to media persons, Minister Yadav said a bilateral agreement was signed to supply LPG by the Nepali gas bullets in near future. He said survey study would be carried out regarding natural gas supply, adding that discussion was held with the Indian side regarding establishing a chemical fertilizer factory in Rupandehi.

Saying officials of Nepal and India expressed satisfaction over the works of Motihari-Amalekhgunj Pipeline Project, Indian Minister Pradhan thanked Nepal government for its support to complete the project. He shared that discussion were held surrounding the natural gas pipeline laid by India along the Muzzaffarpur to Gorakhpur route and how Nepal could reap benefits from it.

Minister Pradhan also informed about the invitation extended to the Nepal's Minister of Industry, Commerce and Supplies and Minister for Agriculture Development by the Indian side for a visit to India to observe the Indian factories. The visit is expected to help Nepali side draw ideas about setting up fertilizer factory in Nepal.

The works relating to the 68.9 kilo metres pipe laying project has been expedited and it is aimed to complete within the 30 months of the beginning of the work.

Once the project is accomplished, the Amlekhgunj Depot of NOC could import fuel at the rate of 191 kilolitre fuel per hour.

Govt subsidy on cooking gas to be reduced gradually

KATHMANDU, May 29: The government has decided to reduce the subsidies on the Liquefied Petroleum Gas (LPG) or cooking gas... Read More...

KATHMANDU, Nov 19: Using an electric stove is 65 percent cheaper than LPG in the kitchen. However, due to lack... Read More...

BIRATNAGAR, Jan 6: Supply of domestic cooking gas, LP gas, has been halted in Biratnagar due to protest of gas distributors. Read More...