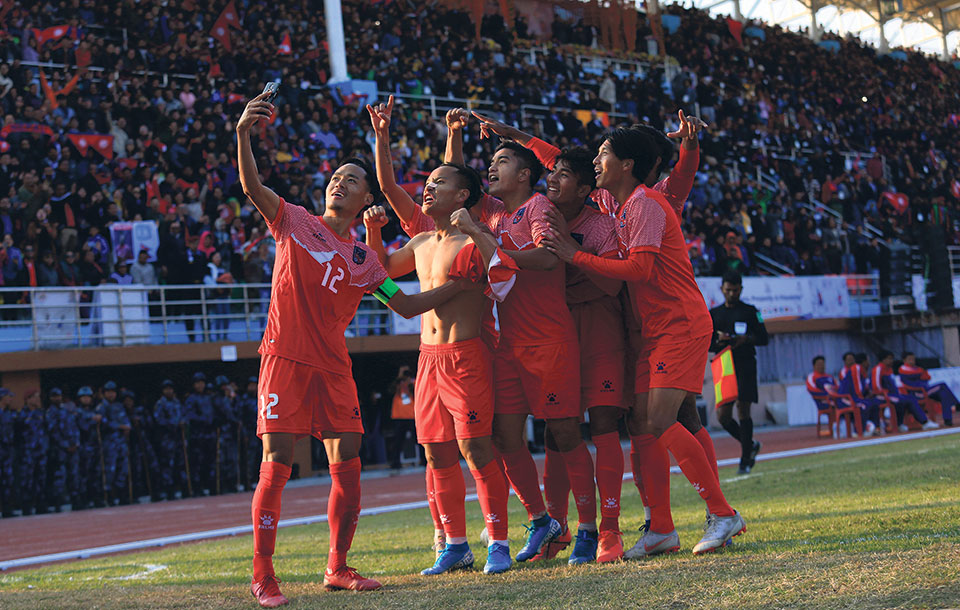 Equals Pakistan’s record of four title wins
KATHMANDU, Dec 11: Nepal added icing on the cake by clinching gold medal in men’s football before the closing ceremony of the 13th South Asian Games (SAG) to take its gold medal tally to 51 on the final day of the regional competition on Tuesday.

The victory was also the joint highest record of four wins in the SAG history of men’s football.

A second-half header from Sunil Bal secured Nepal a 2-1 victory over Bhutan during the final match at the Dasharath Stadium in Tripureshwar.

Nepal scored two goals on either side of the break to retain its gold medal.

Nepal had a barren run without a gold from 1995 till 2010 edition of SAG. Also, with the victory, Nepal has become only the third team to defend its men’s football title in SAG.

In this edition, Nepal went unbeaten to win the gold defeating all the teams it faced except Sri Lanka. In its first match, it thrashed Bhutan 4-0, but was held to a 1-1 draw by Sri Lanka. It picked its pace again defeating the Maldives 2-1 to strengthen its title charge, and then defeated Bangladesh 1-0 to enter the final and fixed its title challenge with Bhutan.

In the final, there was no doubt title favorite Nepal would perform well against an inferior Bhutaense side, who despite pulling a goal back in the first half, went down again to a brilliant header of Bal in the second half.

During the match, Nepal dominated Bhutan with good passing plays, mainly from the flanks.

Abhishek Rijal proved his worth again as he picked a superb header from Ananta Tamang and then beat two defenders before volleying the ball into the post in the 17th minute to give lead to the home team.

Nepal asserted its authority from that very moment as it kept on dominating ball possession and creating a lot of chances. It tried to attack through the flanks with crosses, but the contact was not quite right to add more goals.

Bhutan created some chances too with the most notable one in the 34th minute when Dawa Tshering hit a header from inside the box, but the ball skied over the bar.

The minnow finally equalized as captain Chencho Gyeltshen had four touches of the ball, took the ball to the danger box and beat three defenders to score a goal past Nepal’s goalkeeper Bikesh Kuthu in the 37th minute.

Suman Aryal was brought down by Tenzin Norbu inside the box, but referee Gupta denied penalty.

Nepal started the second half in an attacking mode, but Bhutan utilized the mistakes from the Nepali midfield to create chances, but could not utilize them.

Nepal looked more confident in the second half pressuring Bhutan on counter attacks. Bal then jumped for a superb header to get the ball past keeper Gytltshen Zangpo in the 54th minute to seal the match.

Criminal case filed against police over assault on Nagarik journalist

KATHMANDU, Dec 18: A criminal case has been filed against police personnel involved in manhandling and beating up journalists during... Read More...

KATHMANDU, Dec 3: Nepal bagged seven gold medals and one silver in the poomsae category of taekwondo in the ongoing... Read More...

KATHMANDU, Dec 3: Both men and women Nepali teams have advanced into the semifinals of lawn tennis at the 13th... Read More...