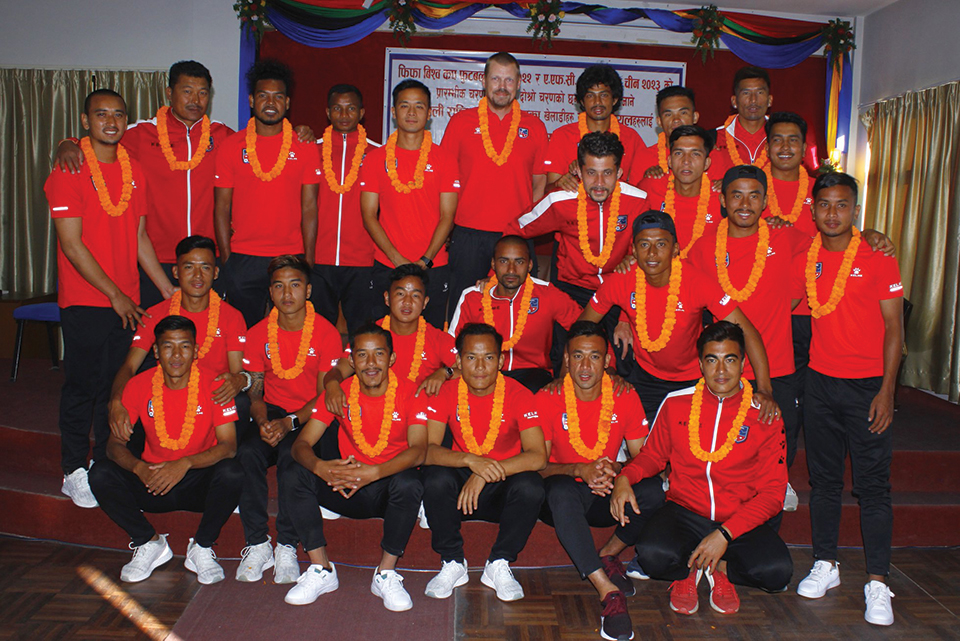 Members of Nepal national football team pose for a group photo during a farewell ceremony on Tuesday before the team leaves for Australia to take part in the second round of the FIFA World Cup Qualifiers (AFC) on Wednesday. Photo Courtesy: ANFA

Revitalized after stunning comparatively stronger Chinese Taipei at its home last month, following a humiliating 7-0 loss to Kuwait, Nepal now hopes for a “positive result” against the Socceroos.

“We will follow the coach’s tactics and give our best like we did against Taipei,” Chemjong told reporters during the farewell function organized by the All Nepal Football Association (ANFA) on Tuesday.

“Australia is a World Cup playing nation. But we are ready for the challenge. We will give our 100 percent,” he added.

Shrestha was given a rest for the Taipei game for health reasons, while Bhandari had sustained an ankle injury.

Kalin also included other three players as backups. The players to serve as backups are Alan Neupane, Bimal Rana and Ravi Silwal.

Kalin said that even though it will be a tough game against a strong team like Australia, Nepal will play its natural game and take a step forward after the Taipei win.

“We have to be a bit more solid than we were against Taipei. We have to improve on our set pieces playing with the same intensity,” Kalin added, “We have to help and direct each other.”

Responding to the bold remarks of his skipper Chemjong, Kalin said that they will give their 100 percent against Australia saying that they shouldn’t lose the confidence before the game starts.

“We shouldn’t say we will lose. It’s a tough game, but we will try our level best. The game starts with 11 players each and with a point each,” Kalin further added, “It’s good to be confident.”

Nepal has three points and is level with Kuwait, Jordan and Australia but is fourth on goal difference.

Nepal will take on Jordan for its fourth group match as its last away fixture on October 15.

KATHMANDU, Aug 24: Sujal Shrestha has been selected as stand-in captain of the national football team for the upcoming friendly... Read More...