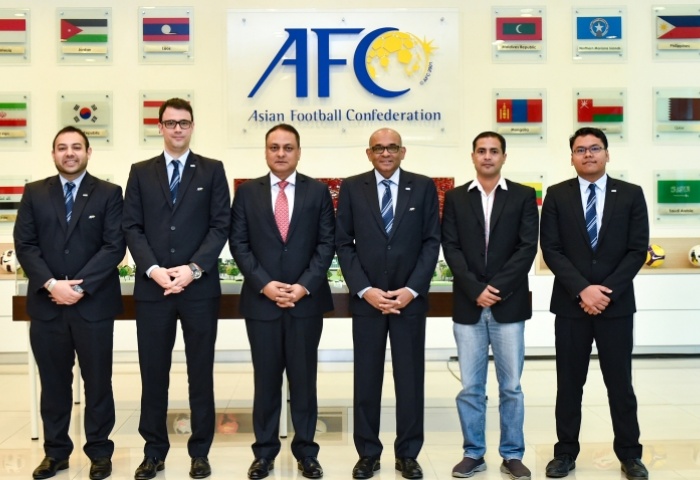 KATHMANDU, Oct 13: The Asian Football Confederation (AFC) on Friday officially recognized the Metropolitan Crime Division of the Nepal Police for its crucial help in match-fixing investigations in the country.

On December 4, 2015, the AFC Disciplinary and Ethics Committee banned four Nepali players and an official for life for match-fixing offenses.

The life ban followed a year-long investigation coordinated between the AFC and its partner Sportradar, as well as the Metropolitan Crime Division of the Nepal Police and the UEFA Integrity Unit.

Deputy Inspector General Sarbendra Khanal, who was previously the Senior Superintendent of Police at the Metropolitan Crime Division, led the investigation into the cases.

The investigating officer was Deputy Superintendent of Nepal Police Sudip Raj Pathak. He was the Inspector of Police at that time.

AFC General Secretary Dato’ Windsor John said, “It is an honor to welcome Deputy Inspector General Sarbendra Khanal and Deputy Superintendent of Nepal Police Sudip Raj Pathak to the AFC House. They were instrumental in the investigation of the important match-fixing cases in Nepal in 2015."

“I am also extremely pleased to hear that the Government of Nepal has now criminalized match-fixing in sport, based on the 2015 case. This is a very positive step towards the fight against the menace of match manipulation."

The successful collaboration between the AFC Integrity Unit and the Nepal Metropolitan Crime Division was a milestone in the fight against match-fixing.

It reaffirmed that effective action against match-fixing requires governmental action and cooperation between sports governing bodies, especially in the field of criminal law.

The focus on criminal justice is based on the fact that competition manipulation is not only a breach of sporting rules but also an offense to public order.

Match-fixing destroys the core social, cultural and educational values of sport as well as undermines its economic role.

The AFC reaffirms its zero tolerance toward and commitment to fighting match-fixing by sanctioning anyone found guilty of it. The AFC looks forward to continued collaboration with Nepal Police.

KUALA LAMPUR, Oct 13: The Asian Football Confederation (AFC) has commended the contributions made by the Metropolitan Crime Division of Nepal... Read More...