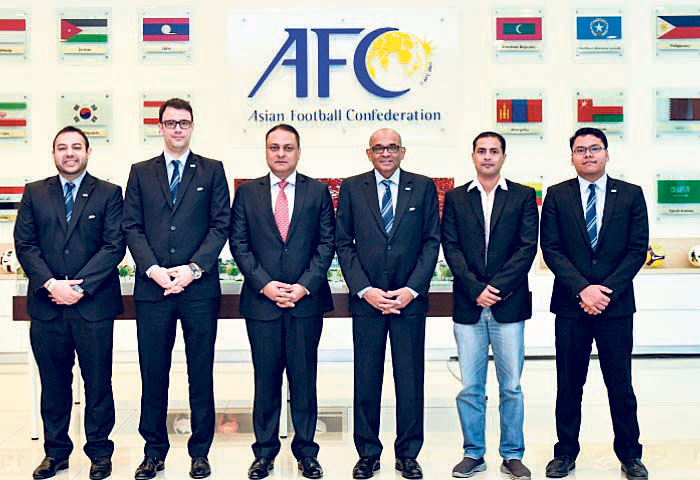 KUALA LAMPUR, Oct 13: The Asian Football Confederation (AFC) has commended the contributions made by the Metropolitan Crime Division of Nepal Police in its investigation of match fixing in the country.

At an event organized on Friday at the head office of AFC, Kuala Lampur, General Secretary Dato’ Windsor John honored DIG Sarbendra Khanal and DSP Sudip Raj Pathak of Nepal Police for their important contributions in the match-fixing investigations, the AFC wrote on its website.

The Metropolitan Crime Division had arrested four national players and an assistant coach for their involvement in the match fixing case in 2015. Official Anjan KC and the then captain Sagar Thapa, goalies Sandeep Rai and Ritesh Thapa, Bikash Singh Chhetri and assistant coach Anjan Bista were found guilty and were handed a life ban for violating the AFC Disciplinary and Ethics Code.
The life bans were handed after a year-long investigation carried out in coordination between the AFC and its partner Sportradar, as well as the Metropolitan Crime Division of Nepal Police and the UEFA Integrity Unit.

“I am also extremely delighted to hear that Nepal government has now criminalized match-fixing in sports,” said Dato adding, “This is an important step to abide sports with discipline. I hope that this step will be an example to the other countries, and they will take this as an inspiration.”

The police investigated the players on the basis of their results in certain matches, contacts with foreign citizens, their backgrounds, their financial activities and the source of income, as well as the money received in the name of the players from abroad.

‘The Shadows in Silion’ fatalistic medieval fantasy
20 hours ago