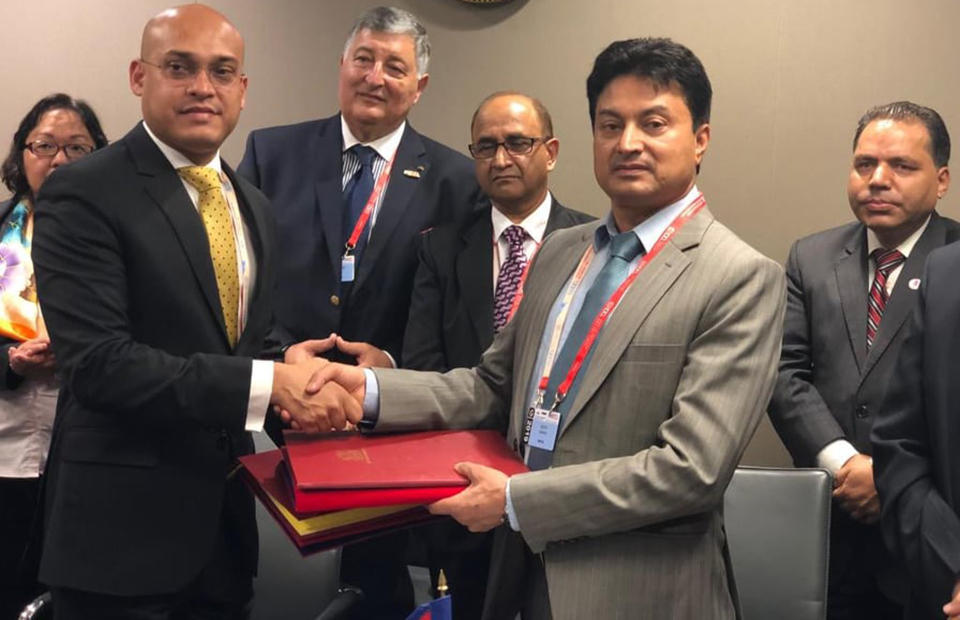 KATHMANDU, June 12: Nepal has signed a Memorandum of Understanding (MoU) with Mauritius for sending workers to the island country in the Indian Ocean.

According to the MoU, Nepali workers will get at least the minimum wage that Mauritians are drawing.

Minister for Labor, Employment and Social Security, Gokarna Bista, and his Mauritian counterpart Soodesh Satkam Callichurn signed and exchanged the MoU in Geneva, Switzerland, on the sidelines of the ceremony to commemorate the International Labour Organization’s 100th anniversary.

The monthly minimum wage in Mauritius is around US$ 240.

The MoU states that employers will bear all the travel and other costs of the Nepali workers headed to Mauritius. An official at the ministry told Republica that all costs and fees for recruitment of Nepali workers, including fees to recruitment agencies, travel expenses, insurance, medical expenses, work permit fees and other expenses incurred during recruitment, will be borne by the employers who hire them in line with the ‘employer pays principle’.

“Through the MoU, both countries have expressed their commitment to control and regulate the practice of charging workers unnecessary fees while going for employment,” Ram Prasad Ghimire, a joint secretary at the ministry, who is accompanying Minister Bista to Geneva, told Republica.
The government signed the labor pact with Mauritius as part of its efforts to diversify the destination for foreign employment for Nepalis. Nepal has so far signed labor pacts with only eight countries out of the over 140 countries where Nepali workers have been going for employment.

“The MoU is mainly aimed at diversifying the labor market for us so that we do not have to face risk due to concentration of Nepali workers in certain destinations when they tighten their labor market,” said Ghimire, who heads the Labor Relation and Social Protection Section, at the ministry. “As Nepal and Mauritius have similar climatic condition, we can expect the number of workers to rise following the signing of the MoU,” he added.

Among others, the MoU comprises a provision that ensures that salary and other compensation for Nepali workers will be no less than the minimum wage for Mauritians. No workers will be discriminated on wages, overtime compensation, work environment and access to justice, according to the MoU.

Similarly, the employer will have to bear all costs for the repatriation of body or last rites upon the consent of families in case of death of any worker in Mauritius. The MoU also establishes the right of workers to have judicial remedy free of cost, while also allowing them to apply for visa and get temporary employment while the case is sub judice.

Leave for workers in case of death of close family members or emergency, insurance coverage and medical treatment in accordance to applicable Mauritius laws, one month gratuity for each year of service and employment certificate while returning Nepal after completing working period are some other major provisions in the MoU.

Coronavirus detected in sewers of Kathmandu Valley
7 hours ago