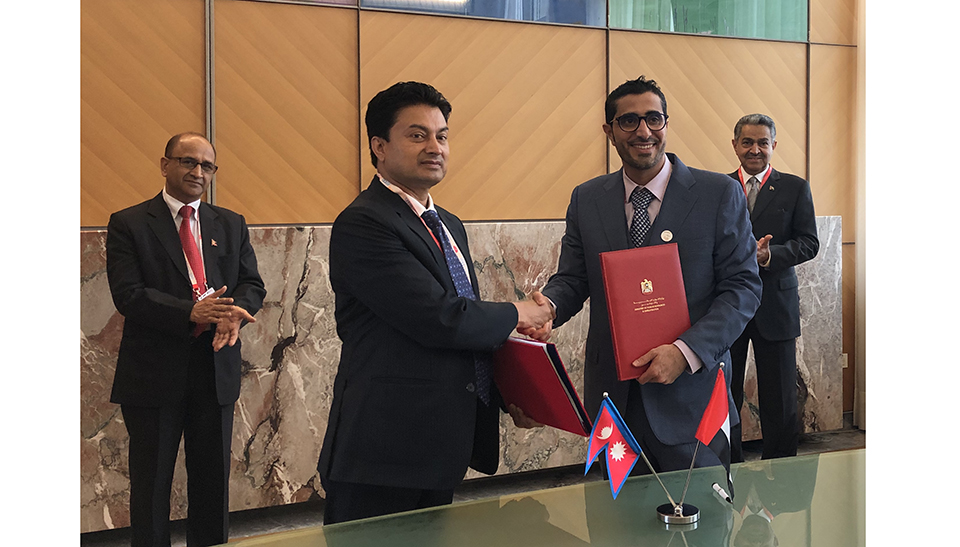 All costs of workers for employment to be borne by employers

KATHMANDU, June 15: Nepal has signed a new memorandum of understanding (MoU) with the United Arab Emirates (UAE) for sending Nepali workers to the Gulf country with employers responsible to bear all costs, including but not limited to recruitment, employment, residency, agency fees, airfare, insurance, and medical test.

Minister for Labor, Employment and Social Security, Gokarna Bista, and the UAE's Minister of Human Resources and Emiratisation, Nasser bin Thani Al Hamli, signed the MOU amid a ceremony held in Geneva, Switzerland.

The UAE is the fourth major destination for Nepali workers. Over 50,000 Nepali workers go for this Middle Eastern country annually for employment. The newly signed labor pact replaces the MoU signed between the two countries in 2007.

"We felt the need to revise the MOU since the last one was signed way back in 2007. It did not include worker-friendly provisions. Revision was needed also in the context of recent migrant reforms in Nepal and in the UAE as well as globally since both countries have endorsed the GCM,” said Ram Prasad Ghimire, a joint secretary at the Ministry of Labor, Employment and Social Security (MoLESS), referring to the Global Compact for Safe, Orderly, and Regular Migration (GCM).

Earlier on Tuesday, Labor Minister Bista, who is in Switzerland to attend an International Labour Organization conference, had signed another MoU with another labor receiving country Mauritius.

With the signing of the MoU, Nepali workers in the UAE will be entitled for the end-of-service gratuity of 21 days for the first five years and 30-day wage for the additional years along with a certificate of service.

In cases of occupational injuries or diseases, employer will have to bear the cost of treatment of the workers, according to the MoU.

Expeditious repatriation of remains of worker at the cost of employment and timely settlement of wages, allowances and other benefits and freedom to communicate with any third party are other highlights of the MoU signed with the UAE.

The government of the UAE shall ensure access to Labor Court for the worker without any cost until the case is resolved. When the case is in the court, the worker is entitled to apply for a temporary work permit in accordance with the relevant Laws of the UAE.

The MoU ensures any worker is eligible to seek and obtain alternative employment when it is duly established that the employer has failed to meet contractual or legal obligations to the worker due to any reason including: closure or winding up of business or if the worker is subjected to violation of any of his/her rights under the UAE laws, without prejudice to the right of the worker to collect his/her dues from the employer, and/or seek judicial redress.

In such events, the worker shall also have the right to return to Nepal upon employer's cost, according to the MoU.