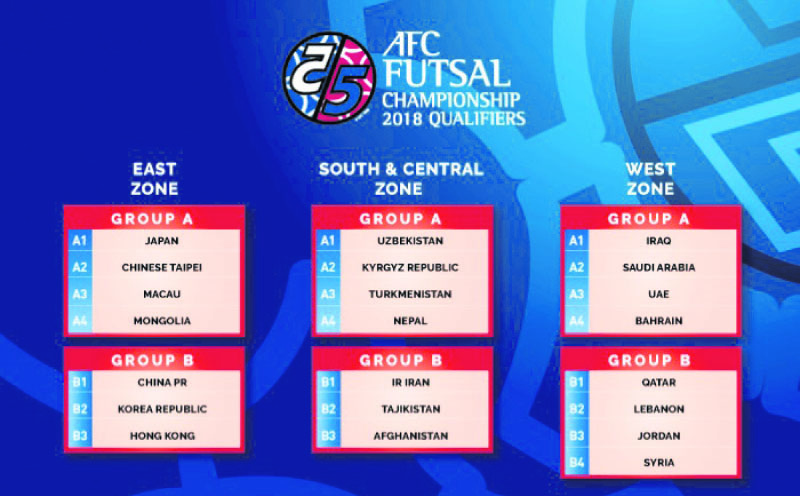 KATHMANDU, July 7: Nepal is set to make a maiden appearance in international futsal during the AFC Futsal Championship 2018 Qualifiers to be held in Iran as a preparation for the South and Central Zone qualifiers slated for October 13-22.

Although Nepal has never formed national futsal team till date, All Nepal Football Association (ANFA)'s Futsal Committee said that it will form the team after selecting players from a league.

Meanwhile, Nepal which is the only nation from South Asia to compete in the qualifiers is pitted in Group A of the South and Central Zone qualifiers, alongside Uzbekistan, Kyrgyzstan and Turkmenistan. Likewise, the qualifiers host Iran is drawn in Group B with Tajikistan and Afghanistan.

Futsal league
Although futsal has been gaining popularity in the country, ANFA's Futsal Committee led by Ramesh Rayamajhi is yet to organize an official tournament. However, Rayamajhi, the president of the Futsal Committee and executive member of ANFA, said that they are planning to organize a futsal league in August, from which the players will be selected for the closed camp training of the national team that will take part in the Asian qualifiers.

"We have been planning behind the scene in order to conduct the league. We are in talks with different organizations who are interested to work as our sponsor," said Rayamajhi, "Beside that we are also studying about the potential venues to run the league. After concluding these works, we will host the league from the second week of August."

The league will consist of the teams from the Kathmandu valley only according to Rayamajhi. "Since this is the first edition and will have limited budget, we won't be able to include the teams from outside of the valley. But, we will obviously encourage players from all over nation for their participation," added Rayamajhi.

"We will soon open the registrations for the clubs to fix their participations in the league. But the clubs should be registered in the government and ANFA's Futsal Committee," Rayamajhi further added.

He also informed that his committee is also in the discussion with the organizers of RedBull Futsal League, a large scale futsal tournament held in Kathmandu last year, in order to learn the experience of organizing futsal tournament. "Since we lack experience of organizing such event, we are in holding discussion with them and trying to learn," added Rayamajhi.

Redbull Futsal League that featured a total of 16 teams from Kathmandu valley was organized by the AMA Events last year with the cash prize of Rs 1 million for winner and Rs 0.5 million for runner-up.

Rayamajhi informed that 16 coaches out those 19 will be sent to 16 teams participating in the league while remaining three will be in selection committee that will select the players from the league for the closed-camp.  ANFA also is organizing the futsal referee course in August who later will be used in the league.

Future plans
Futsal Committee also is planning to make women's national futsal team according to Rayamajhi. "We will form a women's team as well to participate in the international event. We have also planned to organize age-group tournaments in the coming days," Rayamjhi concluded.