KATHMANDU, June 7: The Madhav Kumar Nepal-led faction of the ruling CPN-UML has called a Standing Committee meeting today to discuss the six-point unity proposal put forth by the party Chairman K P Oli, who is also the prime minister, to save the party unity.

The meeting is being held after Oli expressed his commitment to revive all party committees that existed before the unification between the UML and CPN (Maoist Center) led by Pushpa Kamal Dahal on May 16, 2018. This was one of the key demands put forth by the Nepal-led faction, which has already started final preparations to split the party, to keep party unity intact.

Leaders close to the Nepal-led faction said they are holding virtual discussion about the proposals made by Chairman Oli to keep the party unity intact. Oli, however, has set a condition for lawmakers close to the Nepal-led faction to withdraw their signatures provided earlier to make Nepali Congress (NC) President Sher Bahadur Deuba a new prime minister.

The UML and the Maoist Center decided to form a new party named the Nepal Communist Party (NCP) some three years ago a few months after the last parliamentary election. The unification, however, was invalidated by a verdict of the Supreme Court on March 7, 2021.

A joint bench of justices Kumar Regmi and Bam Kumar Shrestha ruled that the Nepal Comunist Party belonged to Rishi Kattel who had filed a writ petition claiming the name of the party. Kattel had registered the NCP before the UML and the CPN (Maoist Center) were merged into the new NCP. The new NCP was led by KP Oli and Pushpa Kamal Dahal which reached the helm of the government after the 2017 parliamentary elections.

Although the apex court's verdict took the UML and the Maoist Center back to their original status before May 16, 2018, Chairman Oli chose to ignore the verdict and reformed the party committees to make sure that he has majority in all those committees. Leaders belonging to the Nepal-led faction were stripped off their party responsibilities, sowing seeds of party split.

The unity proposal put forth by Oli has left the Nepal-led faction sharply divided. While a section of leaders including Yogesh Bhattarai has termed the development 'positive', other leaders such as Ram Kumari Jhakri and Jagannath Khatiwada have said that this could only be a publicity stunt of Prime Minister Oli. Another leader Ghanashyam Bhusal has said that they would publicize their views only after holding a meeting among leaders of their faction.

In the six-point proposal made for the party unity, Oli has proposed reviving all committees of sister organizations that existed before May 16, 2021 and form a taskforce to settle any issues that surface in the implementation of decisions to revive party committees prior to the unification with the Maoist Center. Chairman Oli has assured that no action will be taken against any leaders belonging to the Nepal-led faction for their mistakes or weaknesses in the past. 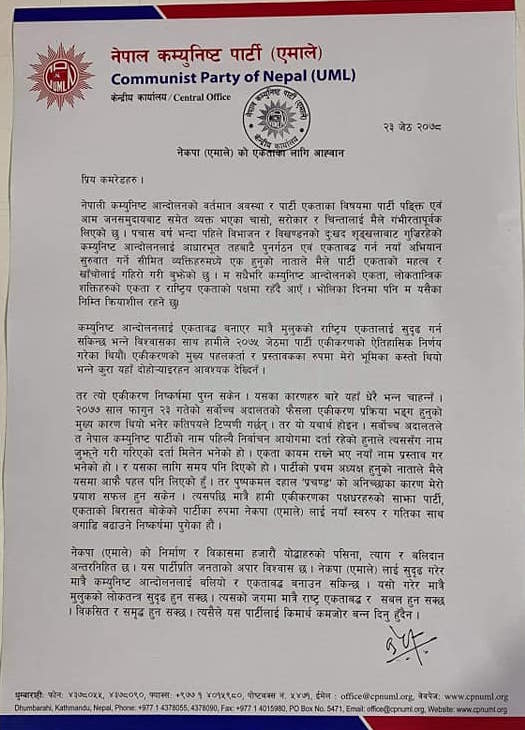 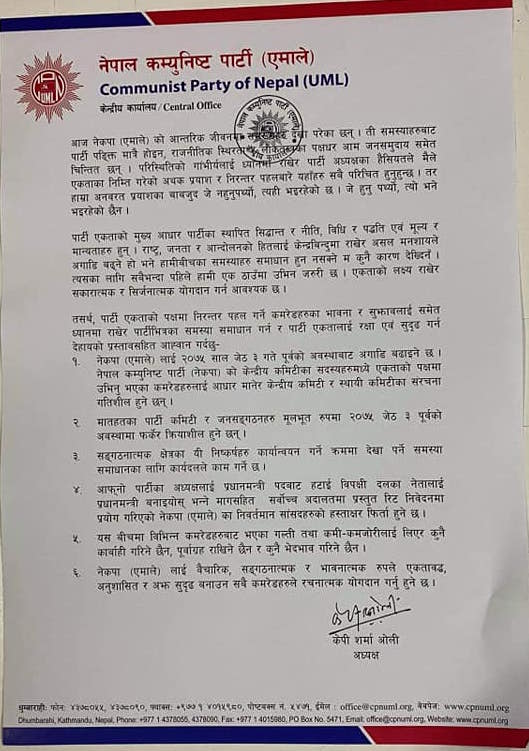 KATHMANDU, July 6: Chinese ambassador to Nepal, Hou Yanqi held a meeting with one of the dissident leaders of the... Read More...