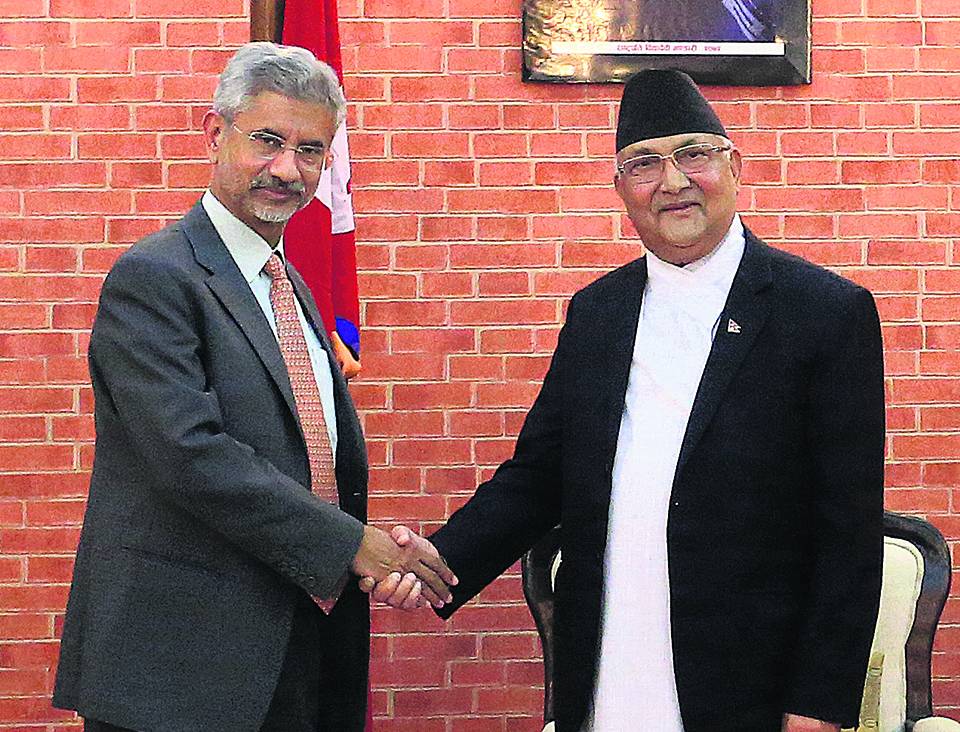 KATHMANDU, Aug 22: Nepal and India have agreed to address the inundation issues caused by obstruction of the natural flow of water along with the border areas.

The two countries made the agreement during the fifth Joint Commission (JC) meeting held in Kathmandu on Wednesday. The Nepali side had long been complaining that embankments built by the Indian side along the border had caused flood and inundation on the Nepali side of the border.

“Noting that inundation is a serious problem for people living in border areas, the Joint Commission underlined the need for addressing inundation issues due to, among other things, inadequate drainage provision that obstructs the natural flow of water in border areas,” said a press statement issued by Ministry of Foreign Affairs (MoFA).

During the meeting, both sides reviewed the entire gamut of bilateral relations with specific focus on the areas of connectivity and economic partnership; trade and transit; power and water resources sectors; culture, and education. “The Joint Commission expressed happiness over the momentum generated in the overall aspects of Nepal-India relations following the exchange of high-level visits in the past two years,” said the statement.

Views were exchanged on the review of Treaty of Peace and Friendship of 1950 and submission of report of the Eminent Persons Group on Nepal-India Relations (EPG-NIR). Matters related to cooperation in international, regional and sub-regional fora were also discussed, officials said.
Shortly after landing at the Tribhuvan International Airport from Dhaka, Bangladesh, Indian External Affairs Minister S Jaishankar had reached Baluwatar to pay a courtesy call on Prime Minister KP Oli.

After a group meeting with the prime minister’s team, Jaishankar held a one-on-one meeting with Prime Minister Oli for about an hour. What transpired during the meeting, however, has not been disclosed to media.

Minister Jaishankar, who came directly from Bangladesh after lobbying Dhaka to support the Indian government’s move on Kashmir, had sought Nepal’s official support for the same move, according to sources.

Nepal has so far maintained a neutral position on Kashmir, while urging both India and Pakistan to resolve the issue through dialogue and ensure regional peace and stability. While two other South Asian nations, Sri Lanka and the Maldives, earlier supported the Indian move, Dhaka had issued a statement supporting the move only after Jaishankar’s visit.

Asked if there was any discussion on formally receiving the report of the Eminent Persons Group (EPG), Bhattarai said that the Indian side would receive the report at an “appropriate time” in future.

Officials said the JC neeting expressed happiness at the progress made in the bilateral projects, such as Motihari- Amlekhgunj Petroleum Products Pipeline, four segments of Hulaki Roads, and post-earthquake reconstruction of private housing in Nuwakot and Gorkha districts which have been completed. They expressed happiness over progress made in Jayanagar-Janakpur and Jogbani-Biratnagar sections of cross-border railway projects and Integrated Check Post in Biratnagar. The Joint Commission agreed to expedite the early completion of remaining agreed projects.

Among other things, the JC expressed satisfaction over progress in three new areas agreed during the visit of Prime Minister Oli to India in April 2018, namely, Raxaul-Kathmandu Electrified Rail Line, Inland Waterways and New Partnership in Agriculture.

On the sidelines of the JC meeting Wednesday, the two foreign ministers witnessed the hand over of two separate checks for post-earthquake reconstruction and the Postal Highway project in Nepal.

The two foreign ministers witnessed the handing over of a check of IRs 807.1 million, which is part of the Indian government’s commitment of IRs 5,000 million toward strengthening road infrastructure in the tarai region of Nepal. Officials said four road packages are ready for inauguration.

Separately, a check worth Rs 2.45 billion toward reimbursement to the Indian government for housing reconstruction in Nuwakot and Gorkha districts was handed over on the sidelines of the JC meeting.

Similarly, the two ministers witnessed the signing of a MoU on food safety and standards between the Food Safety and Standards Authority of India (FSSAI) and the Department of Food Technology and Quality Check (FTQC) on the sidelines of the JC meeting. This paves the way for recognizing each other’s inspections, testing and certification of a number of exportable goods such as vegetables and fruits conducted by the relevant bodies.