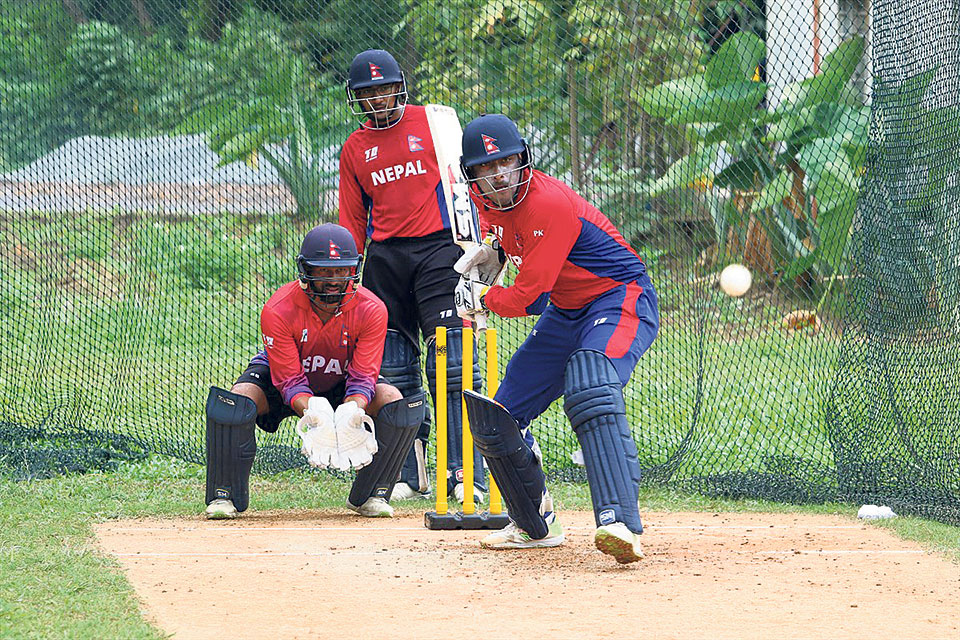 Nepal’s total tally of points will reach six after the two wins including a crucial one against Singapore which will be stranded on five points. Similarly, the winner between Qatar and Malaysia will have four points each making no changes in final points table.

Any loss or no-result due to rain in two remaining matches will dash Nepal’s dream to play T20 World Cup without even reaching the 14-team global qualifiers which is slated for October in the United Arab Emirates (UAE).

Kuwait shoot up at the second on the points table after a commanding win against Qatar in the match played on Friday. Kuwait won by 10 runs after piling up 197 runs in 20 overs and restricting Qatar for 187 runs in reply.

Likewise, Singapore continued its winning form decimating Malaysia by eight wickets on the same day. Malaysia was bundled out for 92 runs before Singapore completed the chase in 13.2 overs.
After the results on Friday, Singapore maintained its dominance in the league at the top of the points table with five points after three matches whereas Kuwait climbed from bottom of the table to second with three points after same number of matches.

Nepal, with a win against Malaysia and defeat against Qatar in first game, is on the third spot on back of better net run rate than Malaysia and Qatar on fourth and fifth positions respectively. All three teams have equal two points.

Nepal’s skipper Paras Khadka has deemed himself fit to go for remaining matches. In that case, Khadka will take-over the captaincy from Gyanendra Malla who led Nepal in the win against Malaysia.

Similarly, the captain will replace struggling Pradeep Airee in the playing XI without disturbing the winning combination much.

Pawan Sarraf might get a look in if the management decides to go on with extra spinner in place of Rohit Kumar Paudel who didn’t bat in second game.

Sarraf offers help with the bat as well having being opened for national team in the past. Lalit Rajbanshi is unlikely to be considered for the must win matches after struggling in field and with the ball against Qatar in the first match.

The rest of the playing XI will see back in-form Malla opening the batting with returning skipper Khadka followed by veteran Sharad Vesawkar and Dipendra Singh Airee.

Similarly, the bowling attack will be spearheaded by pace bowler Sompal Kami who picked up all important three wickets against Malaysia to set the tone for the win.

The exciting Sandeep Lamichhane and experienced Basant Regmi will look to form a formidable bowling partnership in the middle overs.

Pace duo of Karan KC and yorker-specialist Avinash Bohora will look to support the bowling lineup. Binod Bhandari will don the wicket-keeping gloves with a tossup between Sarraf and Paudel for the final spot in the playing XI.

Nepal, which was pegged back to square one after a comeback win against Malaysia on Wednesday, will look to re-start its extended must-win campaign with a match against Kuwait on Saturday.

There is no border dispute between Nepal and China: Foreign Minister Gyawali
10 minutes ago