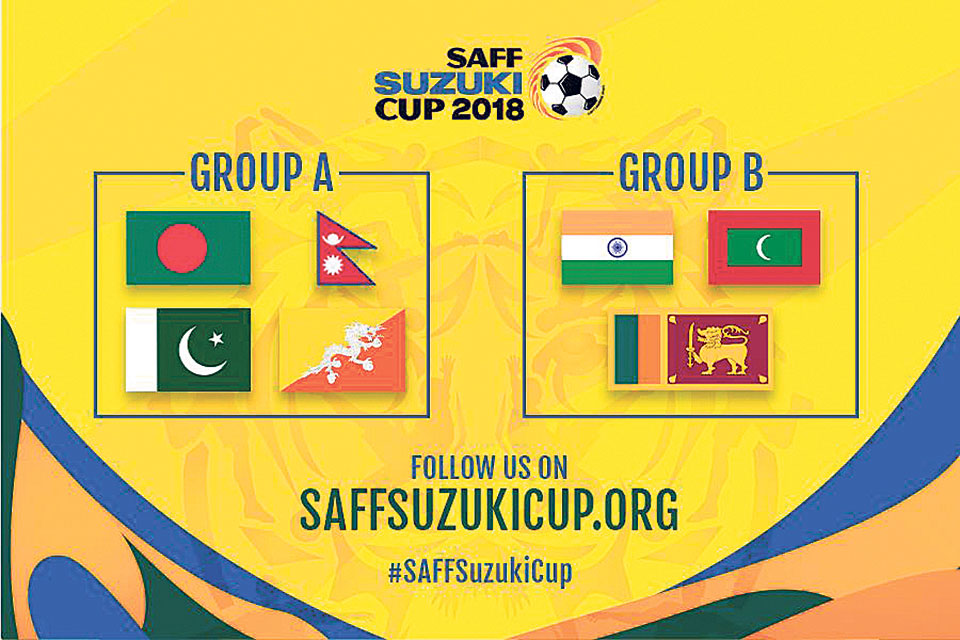 KATHMANDU, April 19: Nepal has been drawn with Bangladesh, Pakistan and Bhutan in Group A for the upcoming SAFF Suzuki Cup 2018 (SAFF Championship) which will be played from September 4 to 15, while India has been pitted with Maldives and Sri Lanka in Group B.

In a draw for the group stages made on Wednesday, Nepal was pitted with the 2003 edition champion Bangladesh besides Pakistan and Bhutan in Group A, while the six-time champion and former winner India was placed with 2008’s edition winner Maldives, and Sri Lanka.

Even though Afghanistan played in the last edition of the tournament, it will not take part this time as it has joined the Central Asian Football Federation (CAFF).

There were only seven nations in the first edition of the tournament as Afghanistan did not participate that time as well. But, after the end of the Taliban rule, the ban on sports was lifted and Afghanistan started to take part in football activities from 2005, starting with the SAFF Championship.

After that, Afghanistan reached the final in three editions from 2011 to 2015. Afghanistan won the eighth edition of the tournament in 2013 when Kathmandu hosted it, while it was defeated by India in the final in 2011 and 2015.

The semifinal journey for Nepal is expected to be comparatively easier as the title contenders India and Maldives have been pitted in the other group. The best performances for Nepal have been two semifinal births.

Nepal reached the last four in the 1999 and 2011 editions hosted in India, and the 2013 edition hosted in Kathmandu.

The captain of the national team Biraj Maharjan said that the draw of the tournament is comparatively easier as Nepal will not face India and Maldives.

“It is necessary to win the SAFF Championship this time. It would be better for Nepali football, all the players, the fans and all the concerned authorities if we win this tournament,’’ Maharjan said, “The earlier editions of the SAFF Championship were not in our favor, but we will go to Bangladesh with an aim to win the competition. It will be easier to catch the rhythm of the tournament as we have avoided India and Maldives in the group stage. But, we have to defeat them if we want to win the title.’’

Maharjan further added that they should be more cautious with the host Bangladesh, although Nepal had played better against Bangladesh, Pakistan and Bhutan in previous editions.
“We can’t predict football and any type of result can come. So, we can’t say anything without playing the game and we can’t underestimate anyone,’’ Maharjan added. “But, I am happy with the opponents we have got in the group stages.’’

KATHMANDU, March 12: Nepal has defeated Bhutan 3-0 in its opener of the Fifth SAFF Women Championship being held at Shahid... Read More...