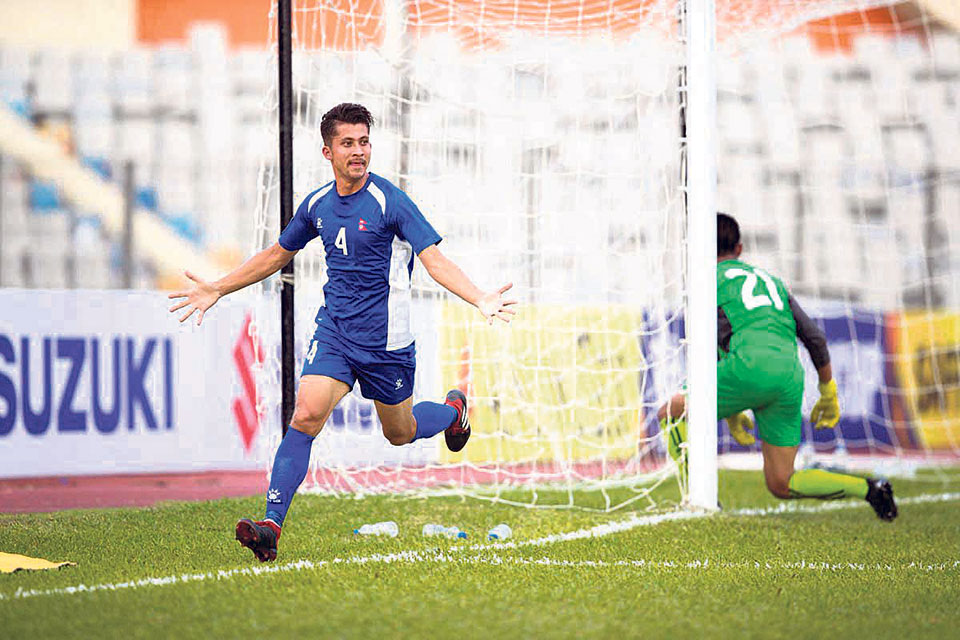 KATHMANDU, Sept 7: Nepal national football team won a SAFF Suzuki Cup match for the first time since 2013 as it thrashed 10-man Bhutan 4-0 with an impressive performance from Sunil Bal at the Bangabandhu National Stadium in Dhaka, Bangladesh on Thursday.

In its second Group A match of the 12th edition of the tournament, which is also known as the SAFF Championship, Nepal took a lead through defender Ananta Tamang in the 21st minute. The lead was doubled in the second half through a 71st minute goal from Bal. Nepal was all over Bhutan as substitutes Bharat Khawas and Nirajan Khadka further added the third and the fourth goals in the 79th and 88th minutes respectively.

Bal was the standout performer for Nepal starting brightly leading the counter attack in the 17th minute by dribbling past the entire Bhutanese after a missed free-kick by Bhutan which hit the wall.

Nepal created many chances in the first half among which Sumal Aryal’s shot was cleared by the Bhutanese defender and the follow up from Rohit Chand was deflected just wide in the 20th minute.

Then, Bal took a dipping corner inside the box and an unmarked Tamang scored a header to give Nepal a lead in the 21st minute.

Nepal’s success in the game was marked by good buildup from the back, but it failed to get an end product in the final third in the first half. Anjan Bista, who had a poor game, was presented by a glorious chance inside the box, but he could not direct his finish in the 24th minute.

Bhutan’ s moment of brilliance in the 30th minute came from skipper Karma Tshering as his shot from just outside the box tested Nepal keeper Kiran Chemjong who failed to grasp the ball before preventing it from going beyond the goalline.

Nepal’s instant chance at the other end of the pitch came from Bal’s corner which was headed away by the Bhutanese defender to midfielder Sujal Shrestha who hit it over the bar playing from the wings.

Nepal got a freekick in the first minute of three added minutes, but Bal’s kick hit the side netting.

Nepal took time to maintain its balance in the second half, and struggled to retain possession. It took Nepal about four minutes to create a chance as Bal’s corner to Tamang in the 49th minute went just wide.
Nepal struggled to create a firm grip on the game despite scoring and taking charge as Chand gave the ball away many times including in the 58th minute being rescued by the defenders. Bhutan got a real chance in the 64th minute when Thinley Dorji got past two Nepali defenders in a scoring position, but was ruled offside.

Nepal could not utilize a glorious cross when Bista hit the post and the follow up was smashed over the bar by Shrestha in the 66th minute.

Khadka was fouled inside the box by Nima Wangdi which saw him get a second yellow card and send off for the rest of the match. Nepal was provided by a penalty in the 70th minute. Bimal Gharti Magar hit the penalty in the right bottom corner, but it was saved by Bhutan keeper and the rebound was scored by Bal.
Magar got another chance in the 72nd minute but his shot was saved by the keeper following a pass from Shrestha.

Substitute Bharat Khawas quickly made his mark as he controlled the ball by his head after the Bhutanese defender misplaced a pass and dribbled past three defenders to slot the ball home into the right bottom corner to make the score 3-0 in the 81st minute.

In the 85th minute, Nepal’s another goal-scoring chance in the game was wasted as Magar, free inside the box, dribbling past the keeper, passed to Khawas who saw his shot blocked as the rebound was again acrobatically hit by Shrestha which was parried away by the keeper.

Shrestha finally registered an assist in the game as his corner was headed powerfully into the net by Khadka in the 88th minute.

A couple of more chances came Shrestha’s way in the second minute of the three added minutes. The first was a diving header saved by the keeper and another shot in the same minute just went over the bar.  Bal played the game of his life as he provided two assists and scored a goal, while Shrestha was unlucky after most of his shots were either saved or went just over the bar.

After the game, head coach Bal Gopal Maharjan said that his team played really well and they have to win against Bangladesh on Saturday to qualify for the knockouts.

In the other group match played on the same stadium, the host Bangladesh qualified to the semifinals of the tournament with a late 1-0 win over Pakistan . Defender Topu Barman scored in the 85th minute to seal the victory. The result leaves Bangladesh staying at the top and surely securing the semifinal place after two consecutive wins. It defeated Bhutan 2-0 on Tuesday.

After losing both the matches, Bhutan is out of the tournament, while Nepal and Pakistan will have to win their respective matches to go through.

Only one of Pakistan and Nepal will go through if Bangladesh gets at least a point, while Nepal has to defeat Bangladesh to qualify and Pakistan just needs a point if Nepal loses against the host. The third round of group A matches will be played on Saturday.

Maldives will take on Sri Lanka in the Group B match on Friday. 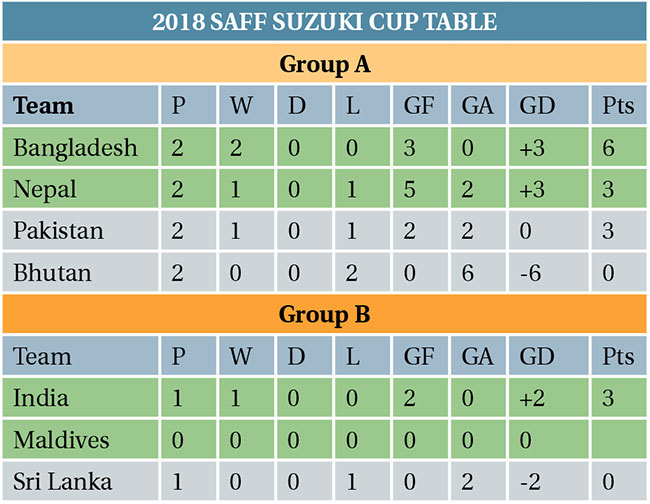 KATHMANDU, March 12: Nepal has defeated Bhutan 3-0 in its opener of the Fifth SAFF Women Championship being held at Shahid... Read More...

KATHMANDU, April 19: Nepal has been drawn with Bangladesh, Pakistan and Bhutan in Group A for the upcoming SAFF Suzuki Cup... Read More...