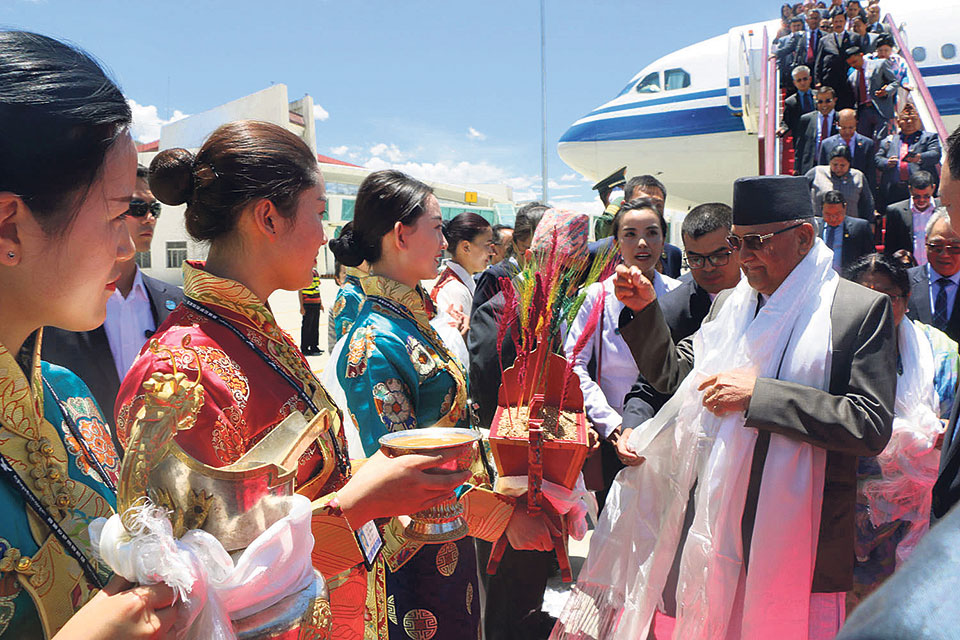 Prime Minister KP Oli and Nepali delegation being welcomed at Lhasa Airport on Friday. Oli arrived in Lhasa on the fourth day of his visit to China. Photo Courtesy: Hari Lamichhane/RSS

KATHMANDU, June 23: Nepal and China have decided to conduct further study on the possibility of cooperation to expedite the development of three North-South Economic Corridors in Nepal.

During the delegation-level talks with China on Thursday, the Nepali side had expressed its desire to expedite the development of Koshi, Gandaki and Karnali Economic Corridors in order to create jobs and improve local livelihoods, with support from China. Nepal expects that these economic corridors could stimulate economic growth and development in those areas.

The development of North South Economic Corridor has found mention in the 14-point joint press statement issued after the delegation-level talks held at the level of prime ministers of the two countries in Beijing on Thursday. “Both sides agreed to further study the possibility of cooperation on the above corridors,” states the press statement.

Besides the 10 Memoranda of Understanding and four Letters of Exchange (LoEs), Nepal and China have also reached a number of agreements to enhance the cooperation between the two countries in the areas of trade, investment and connectivity.

According to the joint press statement, Nepal and China agreed to reopen Khasa port at an early date, improve the operation of Kerung port, ensure sound operation of Araniko Highway and carry out repair and maintenance and improvement of Syaphrubesi-Rasuwagadhi Highway and push forward the construction of a bridge over the Karnali River in Hilsa of Yari port at an early date. Nepali side will complete the disaster treatment around the Tatopani port and along the Araniko Highway, maintain Kathmandu-Syaphrubesi Highway in operational condition.

While terming the MoU on the Cooperation for Railway Connectivity as the most significant initiative in the history of bilateral cooperation, the two countries have expressed confidence that it would herald a new era of cross-border connectivity. “Both sides agreed to make good use of the long-term communication mechanism on railway cooperation between the government departments and promote railway cooperation. The Chinese side agreed to provide such support as in technology and personnel training,” said the joint press statement.

During the visit of Prime Minister Oli to China, the two countries also agreed to encourage Chinese and Nepali airlines to launch and operate more direct flights between the two countries and coordinate closely to speed up the construction of Pokhara International Airport so that it would start operation at an early date.

Nepal and China have agreed to study through different ways the possibility of building oil storage facilities at the sites identified by Nepal. Also, China has agreed to support the feasibility study on oil and gas resources research in Nepal.

The joint press statement states that China agreed to provide technical and financial assistance for product development and post-harvest technology in agro-products and also necessary technical support for the establishment of laboratory and quarantine facilities in Nepal in order to facilitate the exports of Nepali agricultural products to China.

The two countries have also agreed to open additional trade routes between the two countries through mutual agreement and encourage financial transaction through banking channels.

Among other things, China has agreed to encourage local governments, Chinese enterprises and social groups to tap the potentials with the Nepali side on production capacity cooperation, building economic and trade cooperation zones and strengthening cooperation in areas that Nepal has resources and advantages such as construction materials, water conservation and hydropower and organic agriculture and herbs.