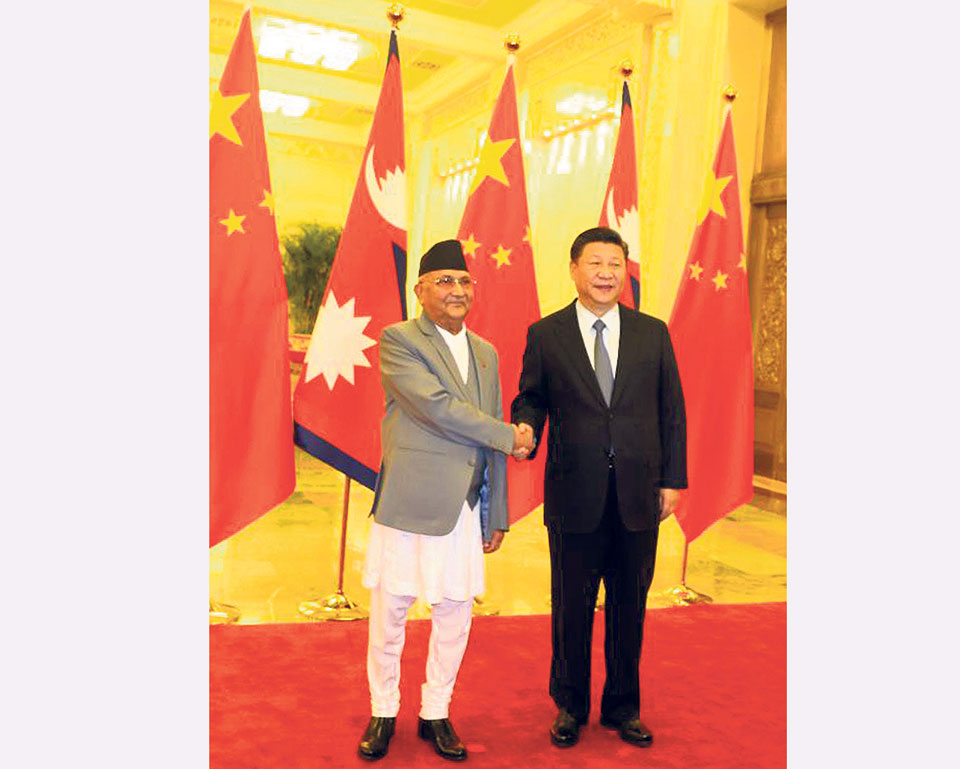 Prime Minister KP Oli with Chinese President Xi Jinping at the Great Hall of the People in Beijing on Wednesday. They held one-on-one for over half-an-hour, according to media reports. Photo Courtesy: Hari Lamichhane/Rss

KATHMANDU, June 21: Nepal and China have agreed to expedite eight major projects in Nepal, during the ongoing official visit of Prime Minister KP Oli to Beijing.

Chief Executive Officer of Nepal Investment Board Maha Prasad Adhikari signed  the agreement on behalf of the Government of Nepal, while Vice President of Huaxin Cement Co Limited Xu Gang signed for the Chinese side.

Earlier on Wednesday morning, Prime Minister Oli met with  Nepali nationals living in China. Addressing the gathering, the prime minister highlighted the priorities of the government and urged all Nepalis living abroad to extend support to the government’s effort to bring about the socio-economic transformation of the country.

Prime Minister Oli also inaugurated the 2018 Nepal-China Business Forum jointly organized by the Embassy of Nepal  and the China Council for the Promotion of International Trade. On the occasion, Prime Minister Oli expressed confidence that Chinese entrepreneurs would take advantage of the conducive atmosphere and investment-friendly policies of the new government formed after the end of protracted political transition in Nepal.

The prime minister is scheduled to hold delegation level talks with his Chinese counterpart on Thursday.

KATHMANDU, April 12: Nepal and India have agreed to expedite the process to ensure early completion of all bilateral economic... Read More...

President did not follow rules and procedures: General Secy Gurung
3 minutes ago