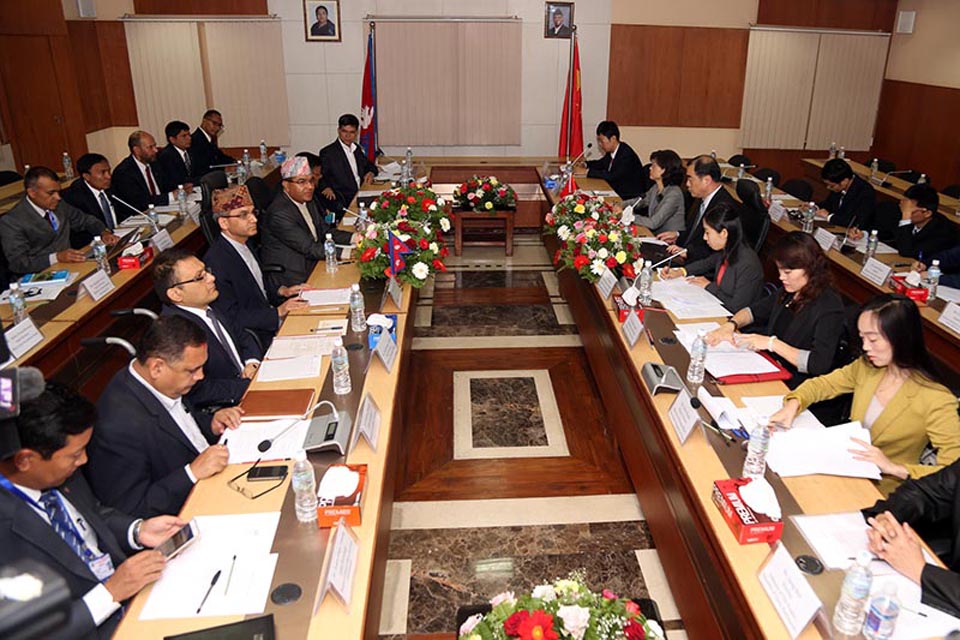 Nepalese and Chinese officials held their 11th meeting of the Joint Consultation Mechanism in June, 2017 in Kathmandu. File photo/RSS

KATHMANDU, Dec 4: The twelfth meeting of the Joint Consultation Mechanism between the Ministries of Foreign Affairs of Nepal and China will be held in Beijing later this week.

Senior officials from the two foreign ministries will sit on December 8 in the Chinese capital to discuss the bilateral projects to be developed under the framework of China-proposed Belt and Road Initiative (BRI), sources at the Ministry of Foreign Affairs said on Tuesday.

Foreign Secretary Shanker Das Bairagi will lead the Nepali delegation while Kong Xuanyou, Assistant Minister of the Ministry of Foreign Affairs of China will lead the Chinese delegation during the meeting.

The meeting is going to take place at a time when Nepal is failing to identify and propose  concrete projects under the BRI framework after the signing of the MoU on the Belt and Road cooperation with China in May 2017. Since then, China has been asking Nepal to propose specific projects that could be taken forward under the BRI.

Announced by Chinese President Xi Jinping in 2013, the BRI refers to the Silk Road Economic Belt and the 21st Century Maritime Silk Road, aiming at building a trade and infrastructure network connecting countries along the ancient trade routes of the Silk Road.

The meeting will dwell on ways to further expand bilateral cooperation in the areas of cross-border rail and road connectivity, infrastructure development, diversification of Nepal’s trade, promotion of investment and tourism, officials said.

Officials said that the Nepali side will emphasize the need of early resumption of Tatopani-Zhangmu border point that has remained close since the 2015 devastating earthquakes.

Foreign Secretary Bairagi is flying to China on Wednesday to attend the meeting. Before Beijing, he will also visit Nepali Consulate Office based in Guangzhou.

The 11th meeting of the Joint Consultation Mechanism was held in Kathmandu in June 2017.

KATHMANDU, Dec 4: Nepal and China have agreed to take appropriate measures to ensure smooth and timely implementation of the... Read More...