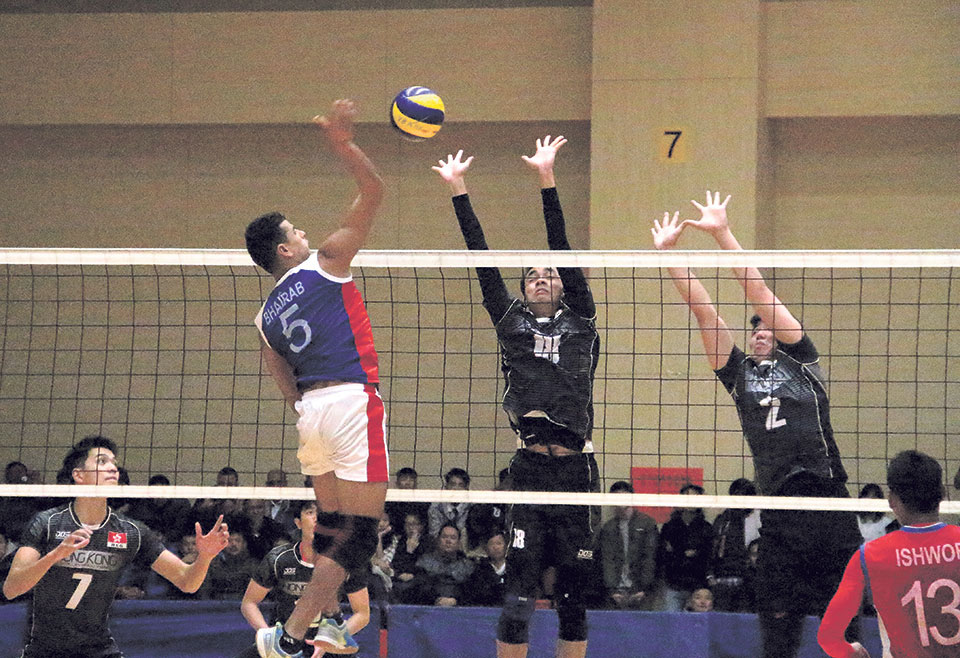 Players of Nepal(blue) and Hong Kong in action during their second friendly volleyball match at the Po Wing Road Sports Center in Hong Kong on Monday.

HONG KONG, Jan 30: Nepal’s national volleyball team has defeated Hong Kong for a second straight time in matches played between the two nations after more than three decades in an international tournament.

At the Po Wing Road Sports Center, Nepal lost its rhythm in the third set despite winning the first two sets which pushed the match to tie-breaker in the last two sets.

Captain of the Nepali team Em Rana Magar said that the Hong tour was overall exciting.

“The team did a good job in receiving and defense in comparison to yesterday’s match. Everything was good in the first and the second set, but the game went out of our control in the third set. They kept us under pressure but we won the match after we successfully coordinated in receiving and blocking,’’ said Magar adding, “We got good support from the people residing in Hong Kong. I want to dedicate the win to our fans. We felt like we were playing in Nepal rather than Hong Kong.’’ Nepal’s head coach Birendra Prasad Chaudhary said that they were successful to bring the result as the team played with full potential in comparison to the last match.

“We lost the third set as Hong Kong played good shots and with good pace in the third set, but we played with caution,’’ Chaudhary said.

Nepal had brought mixed results when it last played against Hong Kong in Japan in 1983. In the first match played in Sagamihara, Nepal saw off Hong Kong 3-2, while it lost 3-1 in the second.
Nepal will leave for Macau on Tuesday to play a friendly scheduled for Wednesday.

Coach Chaudhary expressed his confidence that the Nepali team will also overcome Macau if they play with the same spirit they showed against Hong Kong. He further added that the climate in Macau will not be a challenge for them as the Nepali players have already adjusted with the weather of Hong Kong. “The distance between Macau and Hong Kong is not very far, so the climate will not be much different,’’ added Chaudhary.

Nepal signs off with win over Hong Kong

KATHMANDU, March 30: Nepal signed off the ACC Emerging Teams Cup with a consolation victory as triple half centuries gave the... Read More...

IPOs worth Rs 1.21 billion to be issued
23 minutes ago