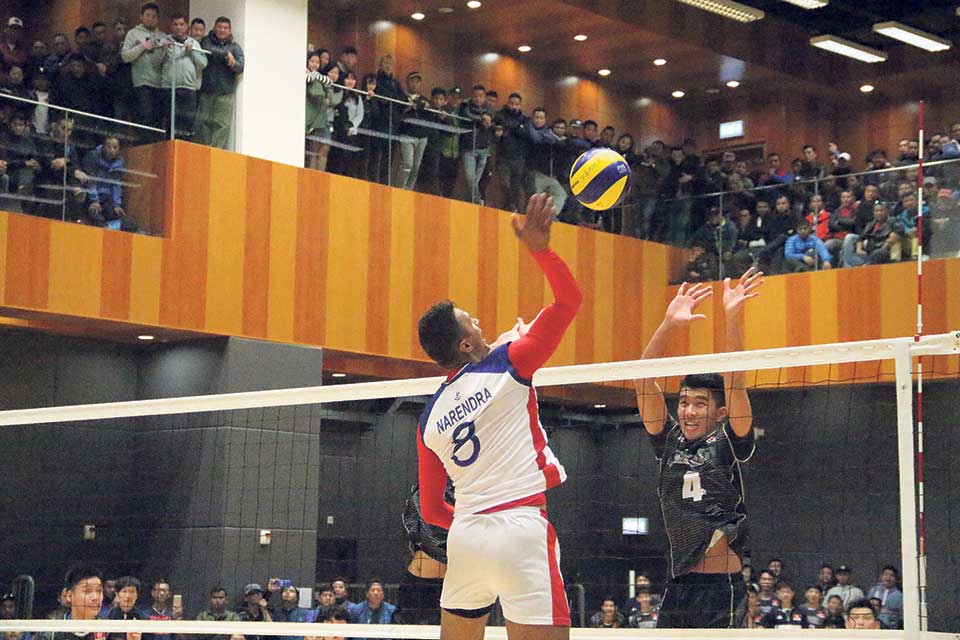 Players of Nepal (left) and Hong Kong in action during their friendly volleyball match at the Yuen Chau Kok Sports Center in Hong Kong on Sunday. Photo: Sujan Shrestha/Republica

Hong Kong took the lead in the start, but the set was drawn at 13-13 before it took the lead again. The Nepali team took the game to 18-18, but was stopped at 23 in the first set.

Although Hong Kong started leading in the second set, the Nepali team fought back brilliantly to claim the game, winning second, third and fifth set.

Hong Kong head coach YauHok Chun said that the match was more entertaining, and Nepal got the support from the crowd.

‘‘The Nepali team was probably tired because of the long travel. The first set for them was a homework, but I could see the joy in their face afterwards,’’ Chun said adding ,‘‘They got huge support from the crowd despite playing here in Hong Kong as most of the crowd were Nepali which helped them.’’

The Yuen Chau Kok Sports Center was jam-packed on Sunday. Nepal will now face Hong Kong again at the Po Wing Road Sports Center in the second friendly match on Monday. After that, Nepal will leave for Macau to play a friendly on January 31.

Hong Kong coach expressed his confidence that his side will improve their mistakes in the second match and play well.

Nepal had pulled off mixed results when it last played against Hong Kong in Japan in 1983. In the first match played in Sagamihara, Nepal saw off Hong Kong 3-2, while it lost 3-1 in the second.

Nepal head coach Birendra Prasad Chaudhary said that his players played well according to the preparations they had done.

‘‘The climate is slightly different from that of Nepal and Hong Kong got to play at home as well. The boys became nervous at first, but I believe Hong Kong and we are of the same standard. Two-three players we had fielded in the lineup could not play well,’’ Chaudhary said, ‘‘Specially, Man Bahadur Shrestha could not perform well, if he had played well, we would have won all the three sets. Our lifter played a clever game and saved us, otherwise we would have gone into a critical stage.’’

‘‘Our defense looked fragile as our block was very poor. The receive position was weak. We will improve our performance in the second match.’’

He added, ‘‘It took time to understand their tactics. Even our coordination was not ticking. We played well after we understood their game. Our receive has not still been good. We will improve that part tomorrow.’’