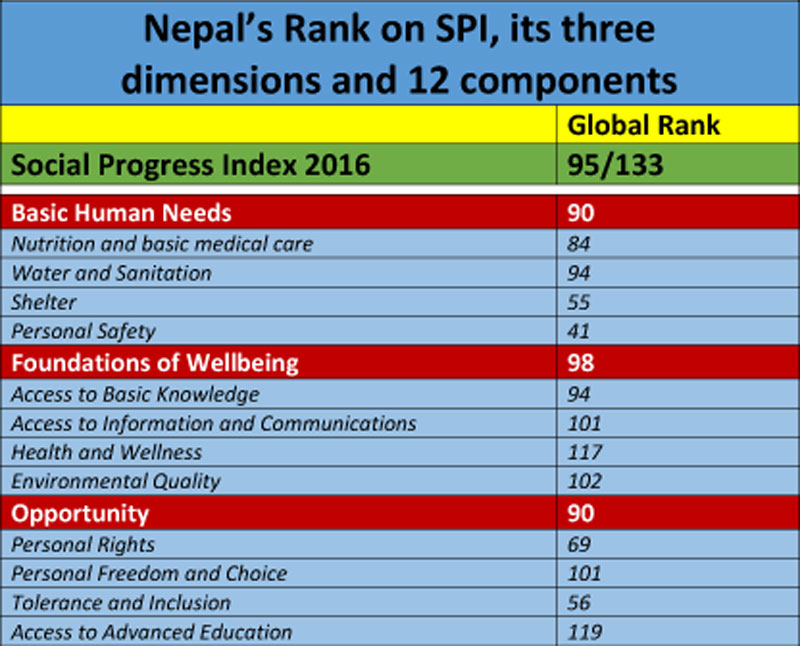 According to the international think tank Social Progress Imperative based in Washington, DC, Nepal’s score of 57.4 is behind only Sri Lanka, and well ahead of India, Bangladesh and Pakistan in the region. Afghanistan ranks second-worst globally. The Maldives and Bhutan are not covered by the index.

The SPI is a new composite index that appraises three dimensions of progress: basic human needs, foundations of well-being, and opportunity. The dimensions are further broken down into 12 components undergirded by 52 indicators. The components range from nutrition to ecosystem sustainability and shelter to tolerance.

The SPI shows that a high level of income does not always translate into social progress. Nepal has the second lowest GDP per capita in the region based on purchasing power parity (constant 2011 international dollars) at $2,265 compared to $5,439, $4,590 and $2,979 for India, Pakistan and Bangladesh, respectively. Yet, Nepal beats all three on social progress. Comparing China, the second largest economy, with Sri Lanka also delinks economic and social progress: While China is ranked 84th, and a notch below Sri Lanka, its per capita income exceeds that of Sri Lanka by $2,000.

The SPI reinforces the message that income is necessary but not sufficient for a higher quality of life, according to Swarnim Waglé, former member of the National Planning Commission. He added, “many attributes we value in life are enabled by and correlated with GDP per capita, but the fact that New Zealand ranks almost as high as Norway on SPI, yet is half as affluent, suggests that social progress can be driven by the progressive values a state and its citizens champion and pursue, as we’ve seen in Nepal despite our indifferent record on income growth.”

Among the 12 components, Nepal is far ahead in tolerance and inclusion compared to other South Asian countries. Nepal’s score in this component is 53.4 compared to 32.85, 24.91, 32.39, 18.86, and 18.65 in Sri Lanka, India, Bangladesh, Pakistan and Afghanistan, respectively. The index confirms, however, that Nepal substantially lags in the ‘Access to Advanced Education’ component. The suicide rate in Nepal, as reported in SPI, appears to be alarmingly high.

According to Prof. Michael Porter of Harvard Business School who sits on the advisory board of the Social Progress Imperative, SPI is designed to complement an income-centric measure of well-being. Indeed, SPI eschews income and looks at only social and environmental aspects. Unlike the Human Development Index, which was also an attempt to go beyond GDP as a measure of progress, SPI is as relevant to middle and high income countries as it is to least developed countries in tracking broader development outcomes.