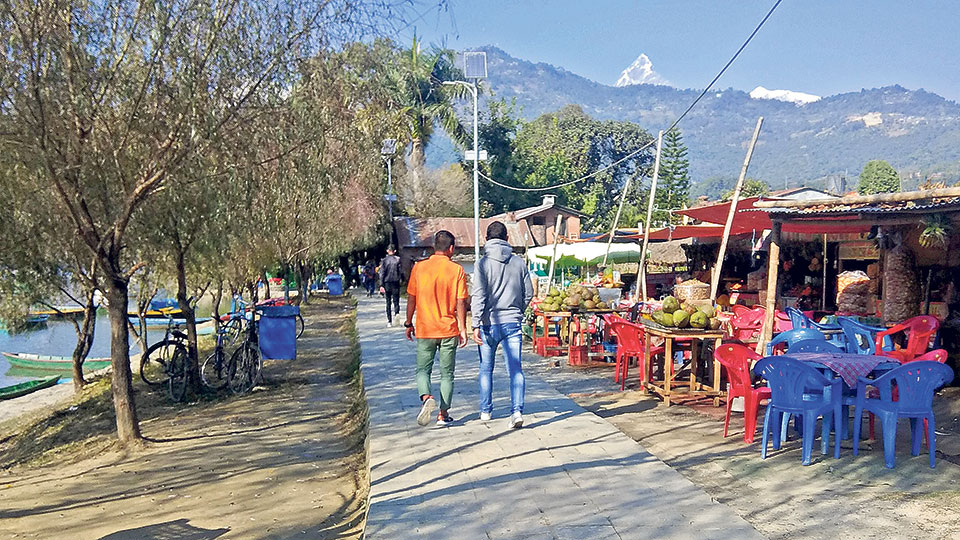 This recent picture shows the foot trail on the shore of the Fewa Lake in Pokhara. Photo: Santosh Pokharel/Republica

POKHARA, Dec 17: Every year, millions of tourists visit Pokhara and enjoy the beauty of the Fewa Lake. While some go for boating, most of them enjoy the beauty of the lake by walking on the foot trail around it. Despite its importance, the trail around the lake remains utterly neglected. It is filthy and dilapidated. Locals put the blame on the lack of action from concerned authorities as well as the visitors.

"Everyone shows that they are concerned about the lake while talking about it. But when it comes to taking action, nobody comes forward. Officials concerned are even more negligent and because of it, the trail has become ugly," noted Kamal Pahari, advisor of Fewa Boat Entrepreneurs Committee, Barahighat. "Until and unless measures are taken to keep the track clean, it is useless to take pride over the lake," he added.

There is no account of the volume of the trash thrown around the lake and on the foot trail. Locals admit that they are used to throw away wastes of food packets and bottles around. Visitors do not hesitate to do that either. Such lack of civic sense is the biggest problem, apart from the lack of initiatives for proper management of the waste, Pahari stated.

"There is no restriction on bringing packaged foods along the trail. Children bring even more stuff. And nobody cares even if all the waste is dumped on the way," Pahari said.

Dust is another ugly feature of the foot track. Since it is not cleaned regularly, a dust-free track is hardly seen except when it rains. "What to say, dust is everywhere. The track is hardly ever clean. There are bushes growing around the trail," Pahari lamented.

According to locals, the issue about the lake's encroachment drew headlines. Along with that growing level of mud and debris near the bank of the lake also has revieved attention from officials concerned and the media. However, the management of the foot trail remains in shadow, they say.

"If we are not able to keep it clean right now, what is the use of crying for a bigger area for the lake? Only issues like the encroachment of the lake's area have been reported. Nobody likes to talk about the foot trail which is so poorly managed," Pahari stated.

A few months ago, a private bank had come to the rescue of the trail. It even took an initiative to upgrade and beautify it at the gate. It had even initiated the onsite construction process, However, this initiation was dashed by some people who protested the action. They were not happy about the bank intervening or advertising itself. As such, the gate these days wears a dead look. Even the construction materials have not been cleaned up. There is a mess everywhere.

Later, the plantation was done around the trail. Even a waiting station was constructed for the comfort of visitors. However, within a few days of its coming into operation, it was mostly covered in dust and litter. From the bottles of beer and other liquors to plastic wastes of junk foods filled this station.

There are garbage boxes installed on the trail but most of them are not in working condition. "The blocks plastered during the construction of the track are no more in place. They are broken and are out of the track. Some such bricks are on the edge of the lake and may fall in," said Pahari.

The foot track has even turned risky for pedestrians. Just recently a woman had fallen, got injured and soon succumbed the injury while walking on the trail.

"Cows and buffalos taking a dip in the lake is a normal routine. People use the lakeside to take sunbathe where they pass time eating oranges and peanuts. And they do not carry the garbage home, they all throw it all over here," Pahari reported. "In the evening they install food stalls here and serve several types of fast foods. Waste generated from these fast food is again dumped here."

According to Batti Prasad Gurung, coordinator of the committee, foot track shows the real status of Fewa Lake. And its negligence shows the apathy of the authority towards one of Pokhara's iconic tourist destination. "Even though our policymakers have been to Naini Taal of India and several other lakes outside the country, they did not learn from there. If we do not show seriousness immediately, the lake is going to be in pathetic condition very soon," he added.

Restaurants and hotels around the lake have also contributed to the filth on this trail. In lack of inspection and strict action against the wrongdoers, they are only feeling encouraged to do so, Gurung noted.

Meanwhile, Chiranjeevi Pokharel, president of Pokhara Tourism Council said that the council will hold talk with the municipality on the issue. "We are going to sit with the officials at the municipality and the wards. This is indeed a serious matter," he said.