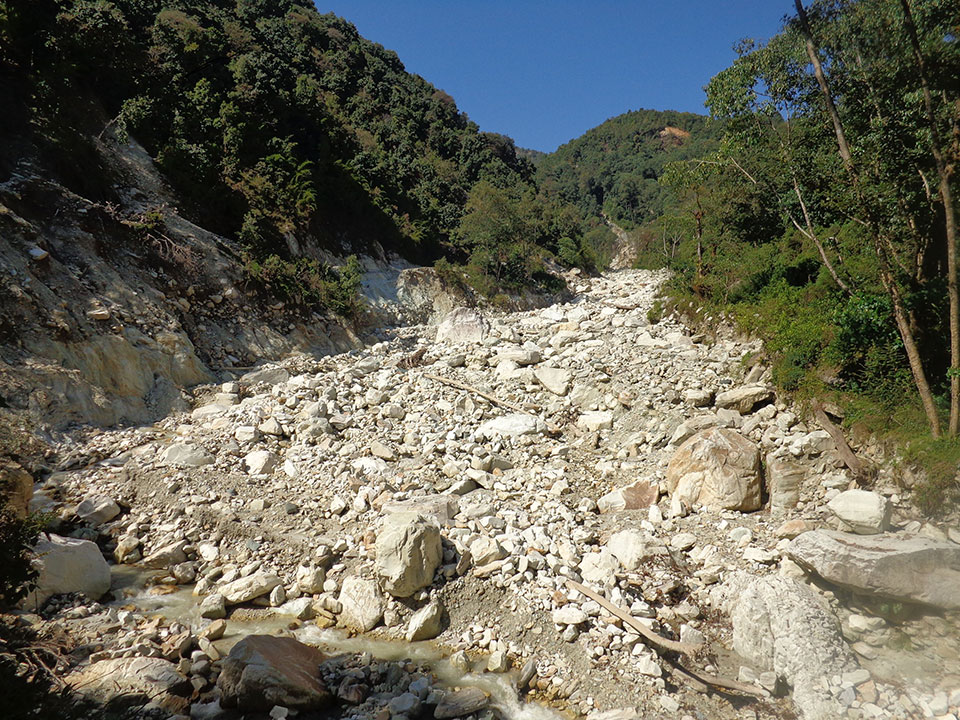 Expansion of road around the Fewa Lake. | Photo: Santosh Pokharel/Republica

POKHARA, Nov 17: ‘Haphazard’ road extension around Fewa Lake has put the lake under risk as the mud released during the construction get deposited in the lake. The ‘haphazardly’ widened road at Pancheswar area has badly affected the texture of the lake, experts noted.

According to Sanjay Devkota, a researcher who had studied the biodiversity at Panchase zone, the area around the lake has seen construction of a network of 305 kilometers of road by 2016.

“When they made 305 kilometers of roads around the lake all the soils ultimately moved down to the Fewa Lake,” said Devkota. “Now, the road extending and widening process has become even more rapid. This is going to kill the lake as the soil is again falling in the lake.”

The roads Devkota referred to are those seen around Panchase. According to him, it is not known which road is going where. There is an absolute mess and the dust has not settled irrespective of the age of those roads.

“You can’t say easily where those roads are going. Nor the construction process ever comes to an end. There is a complete mess. Many roads are being made, nobody cares where the mud goes,” Devkota reiterated.

Another local Dil Bahadur Bhattarai agrees with Devkota’s views. He terms the development as ‘destruction’. Bhattarai, who is also a joint secretary of ‘Panchase Forest Conservation Main Council’ urges the government to immediately stop the ‘insensible’ widening of the road.

“We do not call it a development. We like to call it destruction. It is good to construct roads, but it has to be sensible,” he said. “If they go on releasing mud into the water, one day the lake will be full of nothing but mud. There will be no water left. Right now, roads are being extended in a really dangerous manner,” he added.

The main base of the lake is Panchase area where there are enough number of streams, rivers and jungle. When these areas are being tampered with the construction of roads, the texture of the lake is going to be badly affected, according to other stakeholders.

“Nobody is happy with this kind of roads. The roads needed to be constructed in other side, without affecting the lake,” Bhattarai said. “We are disturbing the natural composition of this place,” he added.

According to Bhattarai, there are around six different roads of 20 kilometers length each around the lake. The road network is extended from Bindyabasini to Sarangkot to Naagdanda to Bhadaure and the list goes on. Sarangkot-Naagdanda road was blacktopped last year. ‘But even this has not been done properly’.

“From Thulakhet to Panchase Bhanjyang, there is 16 kilometers of offroad. There is another similar road from Ghatichhina to Sidane, which is 10 kilometers long. There are many such dusty roads,” said Bhattarai. “Other roads are being constructed and the existing are being widened. Roads have reached all settlements, nooks and corners. But those have not been designed sensibly or scientifically,” he added.

Haphazard use of dozers and excavators has left the soil weak and quite vulnerable to landslides, according to researcher Devkota. Since the last few years, landslides in the roads have indeed become very frequent.

“There is a need to prioritize vital roads and invest on them for upgrading. For the rest of the roads, it is better not to allow heavy vehicles ply them,” Devkota suggests. “If we let things go as they are, we are going to bear a huge cost. Landslides will be even more frequent as the land has become fragile due to the overuse of dozers,” he added.

In 2012, the government had formed the ‘Fewa Lake Conservation High Level Committee’ which has studied several aspects of the lake and recommended guidelines for its conservation. The committee had warned right then that the lake has to be saved from deposition of soil and aggregates which are collected in the lake every year from the tributaries and landslides. The committee has stated that around 22,000 ropanis of the lake’s area has shrunk to just 8,000 ropanis. Apart from encroachment by people, Fewa had lost its land to soil and aggregates. “They had suggested for fixing a check-dam right at that time,” Devkota said. “But the guidelines have not been given any attention.”

The lake now falls in ward number 18, 23 and 24 of Pokhara metropolis. It also shares border with wards 1,2,3 and 4 of Annapurna Rural Municipality. According to the mayor of the metropolis, landslides are indeed getting severe with time. “It is due to excessive use of dozers and poor waste management,” he said. 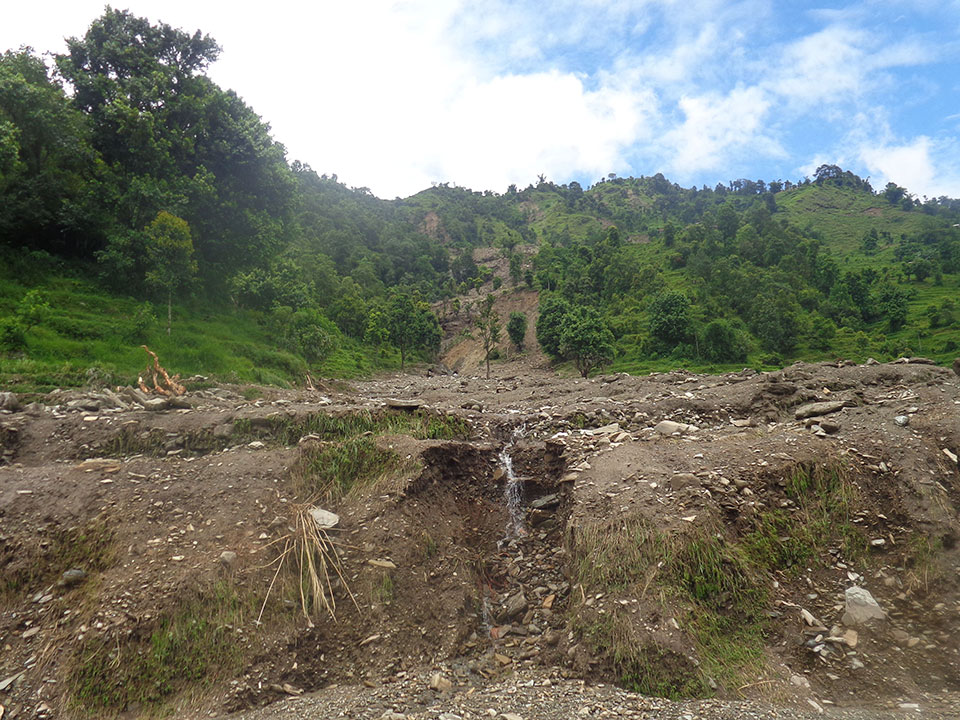