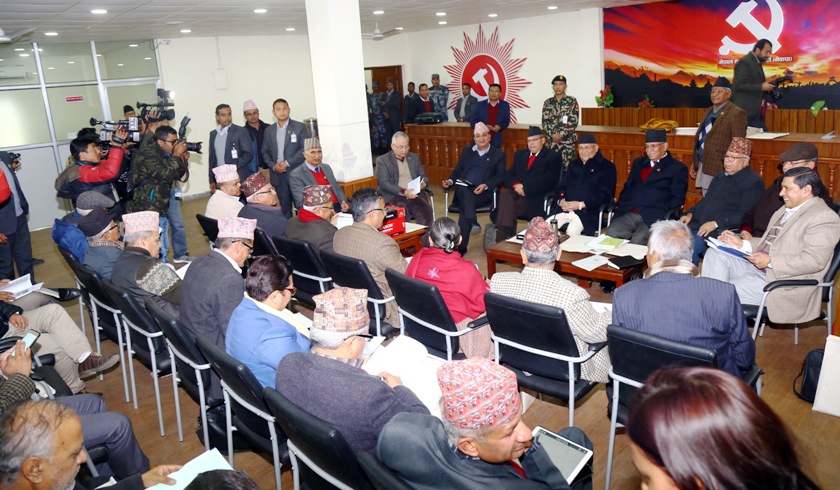 Nembang said that the party secretariat is asked to revise and finalize the political document soon.

"The document will be given final shape by the party secretariat incorporating suggestions and feedback from the leaders during the standing committee meeting," he said.

On Thursday, the meeting had failed to endorse the joint political report prepared by the chairman duo after the dissident leaders of the party opposed it saying the document had failed to accommodate their concerns.

Responding to the concerns raised by the dissident leaders in the party’s ongoing Standing Committee (SC) meeting on Thursday, Oli asked the leaders to endorse the political dossier, promising to incorporate the “genuine” suggestions in the report later.

On Friday, Chairman Oli clarifed his position on crucial issues — proposal to enforce ‘one person, one position’, the controversy over the government hosting the Asia Pacific Summit and the government’s poor performance.

Senior leader Bam Dev Gautam had registered a supplementary report in the meeting. He had demanded that either his views be incorporated in the joint political report prepared by the chairman duo or he be allowed to register a note of dissident.

Other leaders including Bhim Rawal and Ghanshyam Bhusal demanded that the party’s statute be revised so that the Standing Committee could be empowered as the supreme body instead of the secretariat. The existing party statute mandates the secretariat to decide the crucial issues.

Disgruntled party leaders blame the top NCP leaders of tweaking the statute. The original statute, according to the leaders, was drafted to let the Standing Committee decide the crucial issues but top leaders revised it and empowered the nine-member Secretariat as the most powerful body in the party.

NCP leadership is facing a strong criticism from the party leaders in the meeting regarding the delay in party unification, government’s poor performance and leading the government as per the election commitments. In his response to the disgruntled leaders, Oli, however, defended the government’s performance.

The standing committee has also formed an eight-member taskforce to finalize the party's long-stalled unification process in district level and various sister organizations by mid-January.

The standing committee also agreed that another meeting will be convened by the mid-January and give final shape to the party's unification process in district level and various sister organizations by mid-January.

Party leaders said that the party's central committee meeting will also be convened in February.

Meanwhile, the meeting also agreed to launch a campaign from February to bolster the party organization across the country.

KATHMANDU, Dec 17 : Leaders of the ruling Nepal Communist Party on Monday criticized the Oli-led government for failing to... Read More...