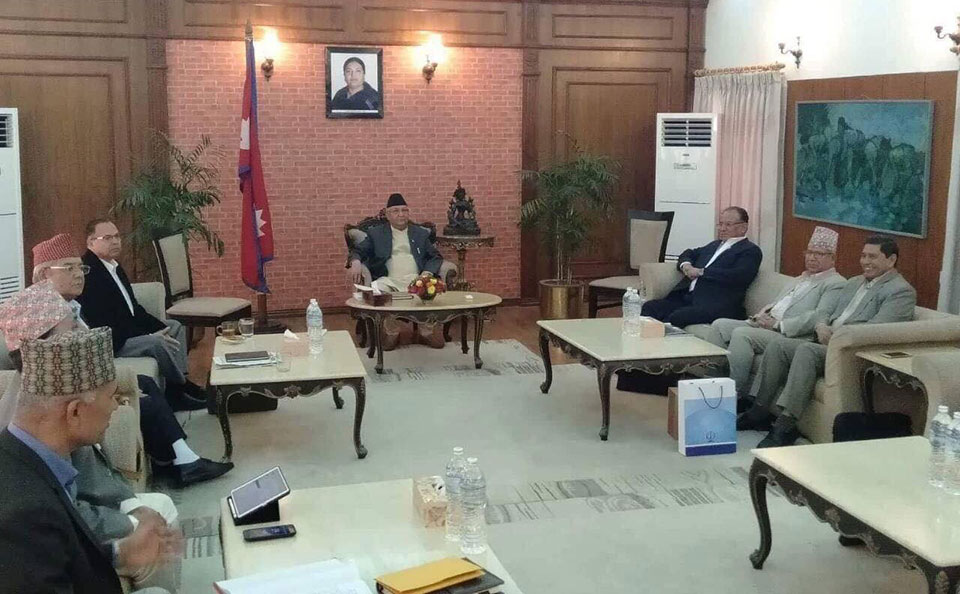 The meeting failed to make headway over finalizing party’s unification process at the provincial and district levels, leaders participated in the meeting said adding that the next meeting of the secretariat is scheduled for Wednesday.

Jhalanath Khanal, a leader of the NCP, told Republica that the meeting dwelt on the issue of finalizing party’s unification process at the provincial and district levels though no concrete decision has been made to this effect.

Khanal, who is also the former prime minister, said that the secretariat has decided to convene the party’s standing committee meeting in near future.

On the occasion, Prime Minister Oli briefed about his recent visit to New York and Cost Rica.

The NCP’s secretariat meeting, which was supposed to be held yesterday afternoon, was postponed citing the busy schedules of co-chairs KP Sharma Oli and Pushpa Kamal Dahal.

The NCP secretariat meeting took place at a time when the intra-party rift has reached at its peak after disgruntled Madhav Kumar Nepal and his close leaders expressed dissatisfaction over the formation of the provincial-level committees bypassing the standing committee. The senior leader called the move as ‘unilateral’ and ‘non-inclusive’.

The Nepal-led faction had convened two separate meetings last week in the Capital in protest of the duo chairmen Oli and Dahal.

The two chairs had decided to nominate 22 office bearers at the party’s local levels when senior leader Nepal was out of the country. Thus, the disgruntled ‘Nepal faction’ of the NCP came heavily against the party leadership.

The two chairmen of the ruling NCP have seen each other after 11 days ... Read More...

Better you come to Butwal and see what a mass gathering looks like, Oli tells Dahal

KATHMANDU, Feb 13: Following the dissolution of the lower house of the federal parliament and announcement of the midterm election,... Read More...

Mayor Shah’s clarification to Bhim Rawal: I held meeting with US envoy after permission from foreign ministry
19 hours ago

20 ‘unlucky’ candidates who lost HoR election even after securing 30,000 plus votes
10 hours ago

20 ‘unlucky’ candidates who lost HoR election even after securing 30,000 plus votes
10 hours ago
Import of EVs crosses 1,000 units during mid-July to mid-November
11 hours ago