NCP dispute at the center reaches the local level 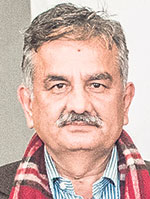 KATHMANDU, Nov 22: The dispute seen among top leaders within the ruling Nepal Communist Party (NCP) in Kathmandu has started surfacing at the local level with rival faction cadres starting to obstruct the programs of their leaders.

A group of NCP cadres allegedly belonging to Prime Minister K P Oli were involved in hootings and obstructing a program attended by NCP leader Surendra Pandey, who is considered close to senior leader Madhav Kumar Nepal, in Chitawan on Saturday. Pandey was one of the six members of the task force formed earlier by the party to recommend measures to resolve the intra-party dispute seen in the NCP.

Local-level leaders and youth activists close to Prime Minister Oli had chanted strong slogans against Pandey, expressing dissatisfaction over various allegations made against Oli. He was addressing a program organized in Birendranagar in Rapti Municipality in the district.

The agitating cadres had tried to chase Pandey away from the program venue, alleging that he was against the party unity. They had chanted slogans like 'long live party unity' and 'let's stand against party split'.

Senior leaders Jhala Nath Khanal and Madhav Kumar Nepal have separately demanded stringent action against those trying to obstruct the program and changing strong slogan against own party leaders. Both the leaders have demanded a probe committee to investigate this pre-planned incident against Pandey in his own home district.

Taking to Twitter, NCP Spokesperson Narayan Kaji Shrestha said the Chitwan incident was objectionable. He said that none of the factions in the party stands to benefit if these kinds are activities are promoted.

Party insiders say this incident could further widen the rift seen among top leaders of the party as Chairman Oli and Executive Chairman Pushpa Kamal Dahal already stand at odds on a number of issues.

NCP is already split; only formal announcement is due: PM Oli