NCP and NC cadres clash in Sarlahi, one shot dead 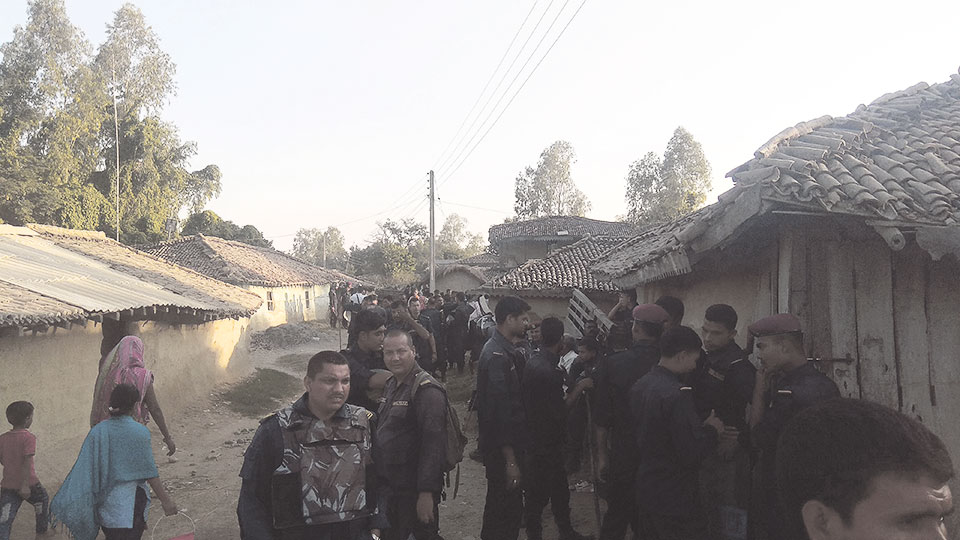 Police deployment in Ramnagar of Sarlahi after Tuesday’s clash between the cadres of the Nepal Communist Party and Nepali Congress. One person was shot dead and seven were injured in the clash.  Photo: Republica

SARLAHI, Oct 31: One person was shot dead while seven others were injured on Tuesday during a clash between the cadres of the ruling Nepal Communist Party (NCP) and the main opposition Nepali Congress (NC) in Ramnagar Rural Municipality of Sarlahi.

The deceased who has been identified as Rambilas Mahato, 60, of Ramnagar-4, Khairwa, died on the spot after receiving bullet injuries. Similarly, Mahadev Ray, Bibek Mahato, Pramod Sahani, Bhojendra Mahato, Shreenarayayn Mahato, Premnarayan Mahato and Mukesh Prasad Mahato were injured in the clash.

According to Rakesh Prasad Gupta, a local youth, more than 200 cadres of NCP started attacking the people by entering their houses at around 7:30 in the morning. “They came here with guns. When we tried to defend, they fired shots and killed one,” said Rakesh.

The protesters had stoned and vandalized the houses of a dozen locals. “For a while, this place looked no less than a battlefield,” said Gupta, adding, “Everyone was attacking each other.” The deceased was the uncle of Ramnaresh Mahato, ward chief of Ramnagar-4. Rambilas was shot in the head and stomach.

The protesters even vandalized the ambulance brought for carrying the injured. Lawmaker Amresh Kumar Singh who was elected from Sarlahi constituency-1 claimed that local NCP leader Shivpujan led the attacks. “This attack was carried out under the protection of the ruling party,” Singh claimed, “Only a day ago, the ward chief was manhandled and the next day his uncle is killed. Sadly, police have completely ignored the incident.”

On Monday, a group affiliated with NCP brutally attacked ward chief Ramnaresh on his way to office. They injured his head and broke his legs. He is currently undergoing treatment at the District Hospital, Malangawa.

Accusing the police of negligence, provincial lawmakers and locals did not allow to remove the dead body. However, they allowed taking the body for a postmortem after the arrival of an Armed Police Force team in the evening. They accused the police of collaborating with the culprits and not taking immediate action against them.

Though the body has been taken for a postmortem, the family members of the deceased have stated that they will not claim it until the police initiate action against the perpetrators. They have warned of staging regular protests in the district headquarters until the deceased is declared a martyr, family receives relief and those involved in the murder are arrested.

Hundreds of Nepal Police and Armed Police Force personnel were deployed in the area as tension ran high around the incident site on Tuesday.

KHOTANG, June 10: A CPN-UML candidate for the local level elections was injured in a clash with Nepali Congress cadres... Read More...

SARLAHI, July 5: Eight police personnel were injured as they clashed with landless squatters in the district on Tuesday. ... Read More...