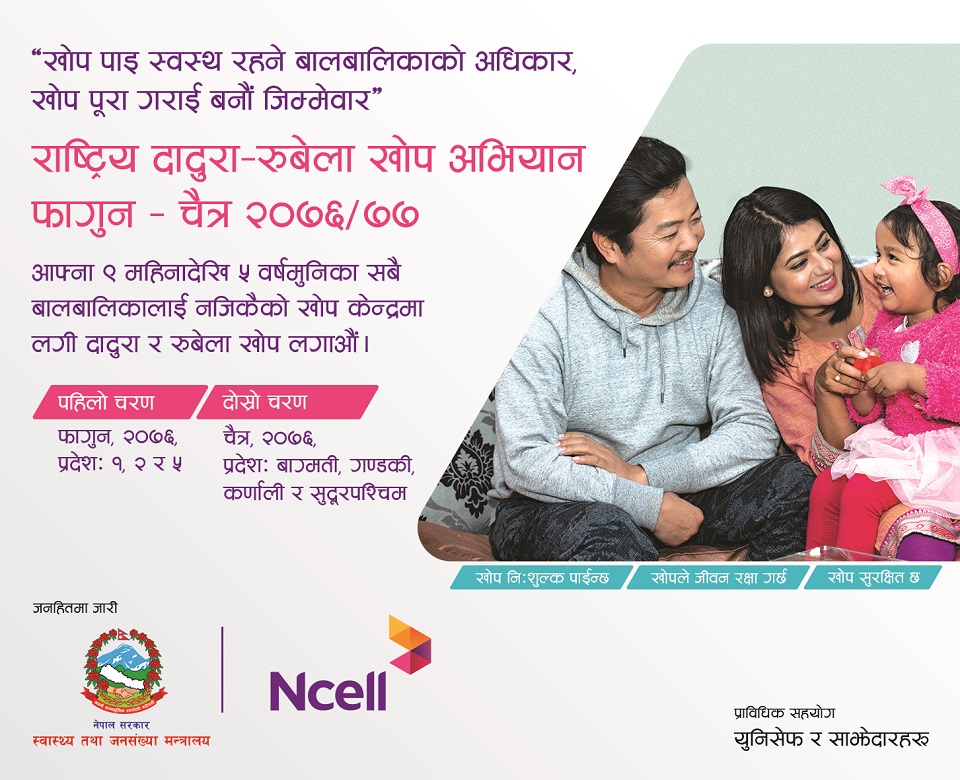 KATHMANDU, Feb 14: Ncell Private Limited in collaboration with the Ministry of Health and Population (MoHP) and UNICEF is supporting the government for the National Measles Rubella (MR) Campaign 2020. The government aims to immunize over 3 million children across the country between the ages of 9 months to 5 years as a part of this much anticipated campaign.

Family Welfare Division (FWD) under the Department of Health Services is implementing the MR mass immunization campaign in two phases. The first phase started on Thursday in Province 1, 2 and 5 which will remain in place until March 13. Likewise, the second phase of the campaign will start from March 14 in Bagmati, Gandaki, Karnali and Sudur Paschim provinces and will continue till April 12.

“We are glad that Ncell has supported the government for this campaign targeted to immunize over 3 million children to achieve 100 percent success. We are grateful for the support and expect similar support in future as well,” said chief of Child Health and Immunization Service Section at the FWD Dr. Jhalak Sharma Gautam.

CEO of Ncell Andy Chong said Ncell is privileged to collaborate with Ministry of Health and Population (MoHP) on National Measles Rubella (MR) Campaign to spread the message on importance of immunization, which is a national health priority. “Healthcare is a vital aspect of our Corporate Social Responsibility activities. Ncell has a greater responsibility as a corporate leader and we are honored to be given this opportunity to be driving such an initiative,” a statement issued by Ncell quoted Chong as saying.

Government’s statistics indicates that cases of MR outbreak are increasing at an alarming rate post 2015. Statistics by Nepal Demographic Health Survey state that percentage of children aged 12- 23 months old, who received all basic vaccines fell from 87 percent in 2011 to 78 percent in 2016.

The statement said the collaboration of Ncell with the government for this noble cause will contribute towards supporting the government to reduce number of death and disability in children and meet World Health Organization (WHO) goal of eliminating MR by 2023. Instances have shown that Measles can cause severe complications including blindness, encephalitis, severe diarrhoea, ear infection and pneumonia while Rubella causes irreversible birth defects.

Ncell as a part of its Corporate Social Responsibility (CSR) initiative had signed a Memorandum of Understanding (MoU) with MoHP and National Health Education and Communication Centre (NHEICC) in 2019 as an exclusive awareness partner for supporting the government to raise health awareness across the country. Previously in October 2019, Ncell had supported the government in broadcasting Dengue awareness messaging across the country via multiple channels of communication.

Why do parents choose not to vaccinate their children against measles and rubella? Why do they fail to complete the... Read More...

Nepal records 111 cases, 415 recoveries and one death from COVID-19 on Sunday