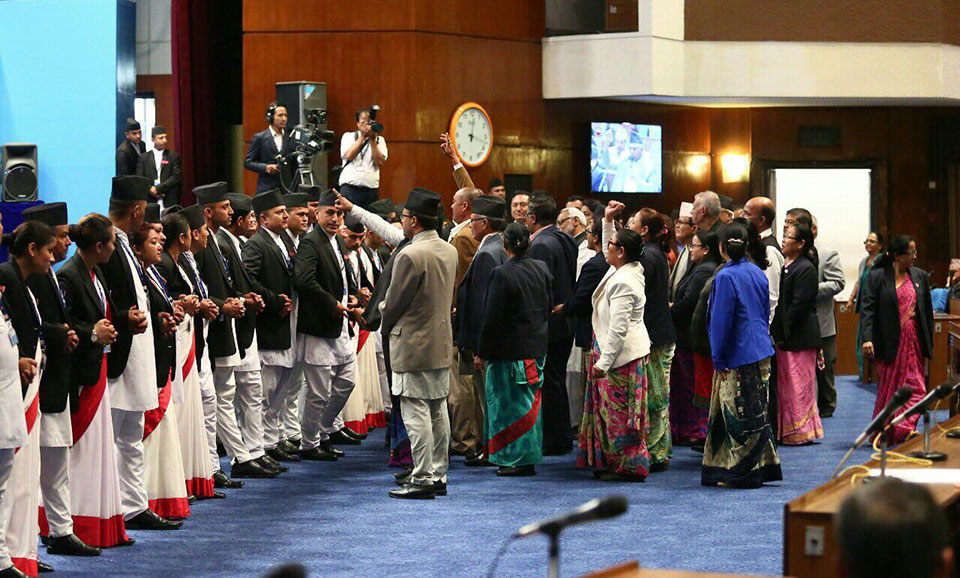 Dissatisfied with the clarification given in parliament by Home Minister Ram Bahadur Thapa on Tuesday, the two opposition parties picketed the speaker's well after Speaker Krishna Bahadur Mahara tried to avoid forming a parliamentary probe under pressure from the ruling Nepal Communist Party (NCP).

This is the first time the NC and RJPN jointly stood against the government after the RJPN withdrew support to KP Oli-led government in March. Lawmakers of the two opposition parties rose from their seats immediately after the commencement of the House meeting on Tuesday demanding answers from the minister regarding the killings.

They demanded a parliamentary panel be formed to investigate the June 20 killing of outlawed Communist Party Nepal's Sarlahi district in-charge Kumar Paudel in police 'encounter' and the June 30 death of Saroj Narayan Singh in police firing in the same district. Singh was killed during a protest staged by locals after a 12-year old child drowned in a pit dug up on the bank of a river by sand excavators.

Family members and locals had blocked the Mahendra Highway accusing the authorities of not listening to the requests for rescue, after a sixth-grader Amit Raya drowned in the pit on the river bank. Opposition parties have accused the police of killing Paudel after arresting him.

As opposition lawmakers rose from their seats, the speaker asked NC whip Pushpa Bhusal to put forth her views. She claimed that the killings of both Paudel and Singh were extra-judicial. Bhusal also flayed the government for backtracking on its decision to test pesticide residue on imported fruits and vegetables under pressure from Indian authorities.

Raj Kishor Yadav of the RJPN, speaking after Bhusal, criticized the government for not being accountable to parliament. He also came down heavily on Prime Minister's chief adviser Bishnu Rimal for his controversial tweet related to witchcraft. RJPN has been also pressing the government to make public the Lal Commission's report on the 2015 Tikapur lynchings.

Home Minister Thapa then briefing the House on the Sarlahi killings claimed that Paudel was killed in an encounter with police and Singh was killed when police opened fire to protect itself from stone-pelting protestors. "The probe committee report has stated that cadres of the outlawed CPN including Paudel had first opened fire at police and he was killed in retaliatory fire by police," said Thapa.

He claimed that police fired six rounds from a self-loading rifle after 11 Nepal Police and six Armed Police Force personnel were injured in clash with protesters in the second incident. "Protesters pelted stones from an elevated area at the police," Thapa said. "The bullet hit the head of a protester when police fired in the air to disperse the protesters."

Not satisfied with the briefings from Home Minister Thapa opposition lawmakers demanded forming a parliamentary probe committee for independent investigation. "When those who were themselves involved in the killings preside over a probe, they will find fault with the deceased," said Min Bahadur Bishwakarma of NC.

Following lawmakers questioning Home Minister Thapa said the government would have no problem if a parliamentary probe is formed to investigate the killings.

Although NC and RJPN lawmakers insisted that the House meeting immediately announce a probe panel, Speaker Mahara sought time for political consultation before forming such panel. Accusing the speaker of attempting to avoid forming a probe panel, opposition lawmakers picketed the speaker's well and chanted slogans. The speaker initially adjourned the meeting for 15 minutes and later till Wednesday after the ruling NCP leaders refused to form a probe panel.

Deuba will not be next party president: Dr Koirala