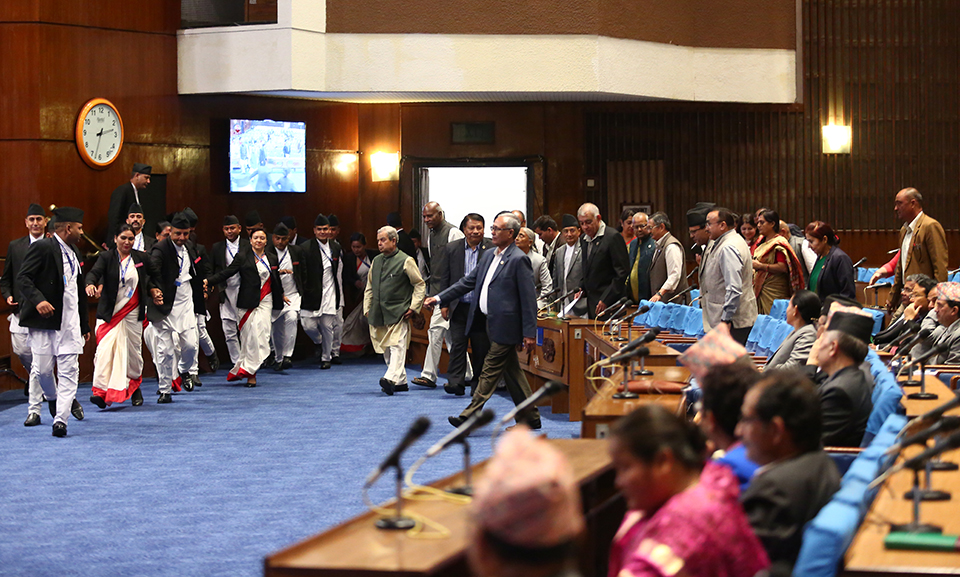 This is the first time since Prime Minister KP Oli came to power that the opposition parties are coming together against the government.

KATHMANDU, July 11: The Nepali Congress (NC) and Rastriya Janata Party Nepal (RJPN), two friends in the opposition bench, have agreed to defend their common interests from parliament and street as they seek to intensify their protest against the government.

Leaders said that the two sides have reached to a consensus on a minimum common agenda, while discussions are in progress to expand the protest across the nation.

Since Monday, the two parties have been jointly obstructing the parliament meeting demanding a parliamentary probe into the killings by police of a leader of the Communist Party of Nepal and a commoner in Sarlahi district.

The move followed a series of meetings between leaders of the two parties including the one held at NC President Sher Bahadur Deuba's residence in Budhanilkantha on July 5. Since then, leaders have held several rounds of meetings at their parliamentary party office in Singha Durbar, RJPN presidium member RajendraMahato said.

“We are exploring other possible areas of cooperation in both parliament and street. For now, we would work together on a minimum common agenda in our struggle against the government,” Mahato told Republica. He said that leaders from the two parties were in discussion to make a list of common demands.

Mahato said they would continue to obstruct the parliament meeting until the government agrees to form a parliamentary committee to probe the death of Kumar Paudel, Sarlahi district in charge of the CPN, and Saroj Narayan Singh, a Sarlahi local. Paudel and Singh were killed in police firings on June 20 and June 30 respectively.

This is the first time since Prime Minister KP Oli came to power that the opposition parties are coming together against the government.

The alliance comes at a time when the opposition forces are facing increasing criticism for failing to stand up to the government, which commands two-thirds majority, on key issues of governance.

In the recent months, the government has been facing bigger pressure from within the ruling party than from the opposition.

While the alliance may have come as a positive sign for the opposition bench, it however remains unclear how far this alliance can go.

The parties, despite sharing common position against the government, still appear divided on a number of issues, especially on the issue of the constitution amendment.

The constitution amendment remains one of the major demands of RJPN, while NC leadership appears unwilling to do so.

The parties are also prime rivals in core Madhesi constituencies.

“Our partnership would be limited to a set of agendas. There hasn't been any agreement on the constitution,'' said an NC leader, who was present in the meeting held at Deuba's residence.

RJPN leaders are working to forge an alliance with forces outside the parliament to start a nationwide campaign for constitution amendment.

Mahato, who is heading the RJPN's talks team, said that at least seven ethnic parties have expressed their commitment to form a national alliance to mount pressure for constitution amendment.

“We will start a nationwide street protest as soon as there is a consensus on common demands,'' said Mahato.

14 days' isolation required even after discharge from hospital: Chinese doctors
2 hours ago

Defying lockdown, people flock to streets, shops in Bhaktapur (with photos)
4 hours ago

NA plane returns from China with medical equipment
8 hours ago