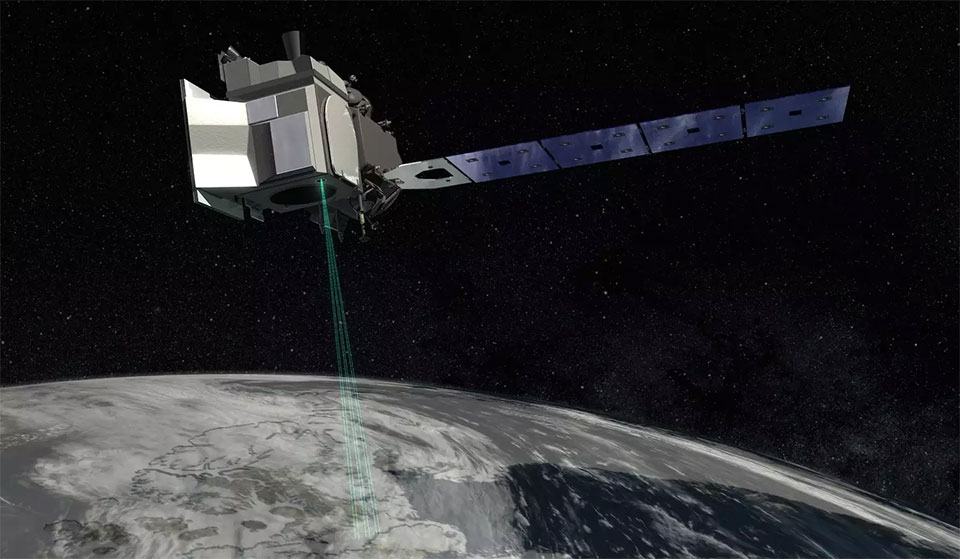 The ICESat-2 mission will measure the changing height of Earth’s glaciers, ice sheets and sea ice, one laser pulse at a time, 10,000 laser pulses per second. Credit: NASA

The satellite will send 10,000 laser pulses to the Earth every second to build a picture of the planet's surface and how it's changing

Nasa has launched a new satellite which will use lasers to measure how much polar ice caps are melting and help scientists predict the future impact of global warming.

The device, called ICESat-2, or Ice, Cloud, and Land Elevation Satellite, is the result of a ten-year, £1 billion mission at the space agency. It will use laser technology to keep track of small changes in the planet’s ice sheets which will, in time, provide a more accurate picture of how climate change is affecting ice melt and sea levels. 10,000 lasers per second

The satellite, which is the size of a small car, and will operate by orbiting and continuously sending pulses from six lasers down to the Earth’s surface – at the rate of 10,000 laser pulses per second. It carries the Advanced Topographic Laser Altimeter System (ATLAS) which will then measure the travel times of laser pulses to calculate the distance between the spacecraft and Earth’s surface.

Using this information, scientists will be able to measure the thickness and heights of ice sheets and sea ice and thus build a more precise picture of where the most “mass loss” is occurring.

Helen Fricker a professor of glaciology who worked on the project, told Boston’s WBUR radio that the launch on 15 September was “overwhelming”.

“We’ve been working on this mission for more than a decade. The concept of the mission had been in our heads, but we haven’t actually seen it sort of on the spacecraft and being sent into space,” she said.

The size of a Smart car

“The instrument itself is about the size of a Smart car. It carries lasers, and the laser will send a laser pulse down to the Earth’s surface and bounce back and it times how long it takes. It does that many, many, many times, and it will build up a picture of the Earth’s surface and basically just keep doing that for as many years as it’s in orbit.

“We can see from that information how fast the ice is responding to changes in the ocean and the atmosphere, and over time, we can build up a time series for every location on the ice sheet and figure out what’s causing those changes.”

She said that this information will help them to be able to more accurately predict future sea levels so humans can plan for the changes to the Earth.

It will help predict changes to sea levels “As the climate is warming, we are seeing changes in the sea level — sea level is rising — but the ultimate thing that we’re trying to get to is, how much ice will we lose and how quickly will we lose it?” Nasa’s deputy project scientist, Tom Neumann, said that this mission differed from work done in the pasts because it is the first time they will be able to measure the thickness of the ice, rather than just the surface area.

He told the Guardian: “Thickness is a key piece of the puzzle because thinner sea ice is broken up more easily by storms. It melts faster. So it gives you some insight into why the area is changing the way it is.” It is one of a fleet of satellites owned by Nasa which are observing the Earth’s surface. The Environmental Defense Fund has also announced a new joint project with Harvard University which will see the launch of a satellite that measures and pinpoints methane leaks. And the European Space Agency already has a satellite that measures greenhouse gases.

NASA gives all clear: Earth safe from asteroid for 100 years

NASA technology to be launched from New Mexico spaceport