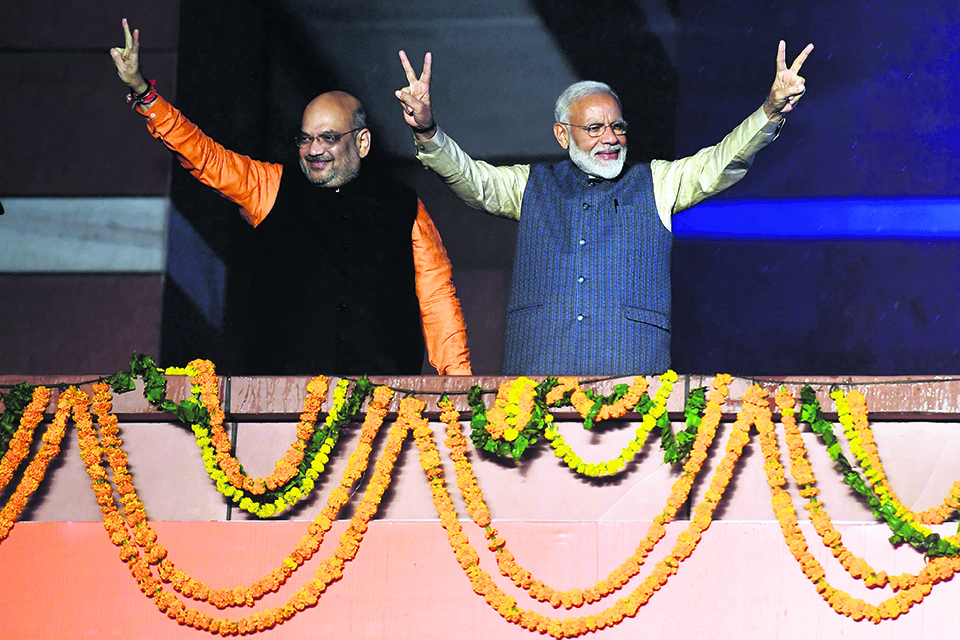 KATHMANDU, May 24: As Narendra Modi secures another five-year term after a landslide victory in the Lok Sabha elections in India, there are high hopes in Nepal that relations between the two countries will further strengthen even as there were some hiccups during his previous stint as prime minister.

Analysts in Kathmandu say the re-election of Modi as Indian prime minister will help not only expedite various major development projects that the two countries have already agreed, but also explore new areas of cooperation as both India and Nepal will now have ‘strong’ and ‘stable’ governments in place. Besides enhanced bilateral interactions, analysts also argue that the global positioning of India, which is expected to grow further under Modi’s second term, could benefit Nepal in many different ways.

While arguing that Modi’s re-election is a positive development for Nepal, former ambassador of Nepal to India Dip Kumar Upadhyaya, who is also a senior leader of the Nepali Congress, credits Prime Minister Modi with developing a system to deal with issues concerning Nepal through the political level. “How India looks at Nepal depends largely on Nepal’s national policy. We tend to say yes to everything we are asked. We won’t have any problem if we define our foreign policy goals and stand firm on them,” he said.

Upadhyaya said Modi’s rise could bring a positive impact on Nepal if Nepal remained clear on its foreign policy goals and objectives.

Although a section of analysts in Nepal are equally apprehensive that the rise of Modi as a strong leader in India could also invite unwarranted interference in the internal affairs of small neighbors, many beg to differ. “Since Modi himself is aware that the recent border blockade had tainted the image of India as a whole, there is no possibility of interference in Nepal’s internal affairs,” said foreign affairs expert and former ambassador Hiranya Lal Shrestha.

Shrestha also ruled out the possibility of Indian coercive diplomacy to impose its agenda in Nepal, as other foreign players have also grown equally influential.

In his previous stint as prime minister, Modi had tried to give due importance to neighbors —something the Indian political leadership ignored for decades. As a manifestation to that priority, Modi invited the heads of governments from all South Asian nations to his oath-taking ceremony.
Although he also introduced a ‘neighborhood first’ policy, Modi is widely criticized for failure to improve relations with most of India’s neighbors. In fact, India’s relations with Nepal reached a historic low when the Indian side enforced an unofficial economic embargo, citing protests at the border.

There were some visible corrections in India’s policy towards Nepal after the unofficial embargo was lifted. But these hardly helped to revive the traditional intimacy and closeness between the two countries. The fraught nature of relations between the two countries surfaced again when Nepal decided at the eleventh hour to pull out of joint military drills for BIMSTEC member states held in India.

This does not mean Modi did not take any initiative to improve relations with Nepal, though. Besides paying official visits to Nepal thrice, Modi also took initiative to form an Eminent Persons’ Group with the responsibility of reviewing the whole gamut of bilateral relations including various treaties between the two countries and recommending measures to improve those relations. The EPG report, however, still awaits Modi’s perusal.

Former foreign secretary Madhu Raman Acharya argues that re-election provides Modi an opportunity to mend India’s relations with its neighbors. “Let us hope the Modi government will give due importance to mending relations with neighbors during this stint,” he said.

President Bhandari emphasizes on role of law education for promotion of rule of law
57 minutes ago
Rs 10,000 fine slapped on Rajpur's mayor for not providing information
1 hour ago