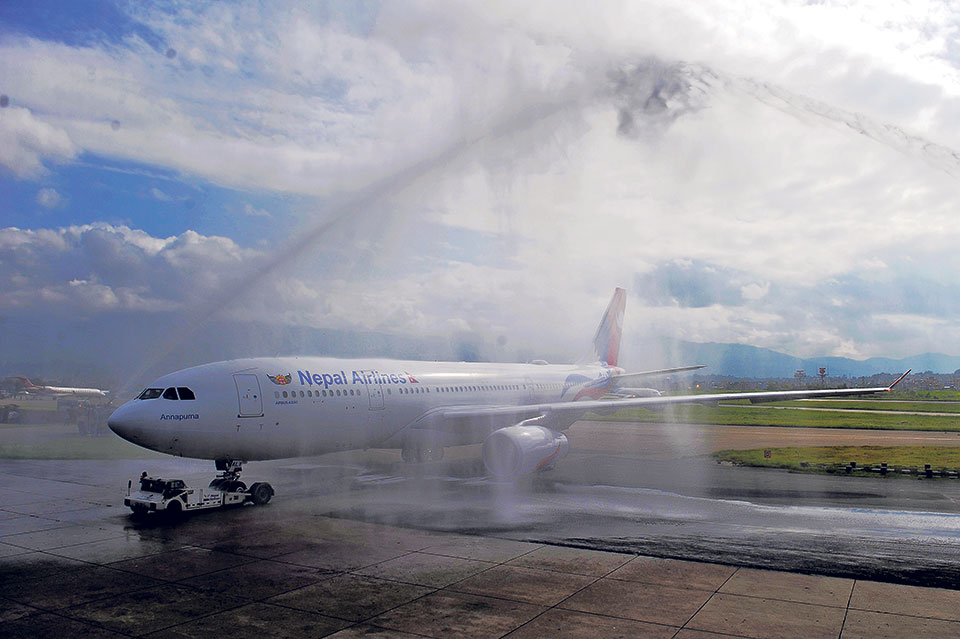 KATHMANDU, Aug 2: Nepal Airlines Corporation (NAC) has entered into wide-body era, as its new Airbus A330-200 aircraft operated its first commercial fight by flying to Doha of Qatar Wednesday night.

The aircraft with 9N-ALy call-sign, which has been named Annapurna, left for Doha at 9:25 pm with 258 passengers on board. Similarly, 250 seats have been booked for the return flight, according to officials of the state-owned carrier.

The new wide-body jet is configured to carry 274 passengers -- 18 in business class and 256 in economy class.

NOC Spokesperson Rabindra Shrestha said that both foreign and Nepali pilots will fly the wide-body jets initially. “Six NAC pilots have received all necessary trainings and are now ready to fly,” he said, adding that NAC will give priority to Nepali pilots.

According to NAC, 12 captains and 12 first officers are needed to operate its two Airbus A330-200 aircraft to full capacity.

Sugat Ratna Kansakar, general manager of NAC, earlier said that NAC needs a total of 116 pilots to fly its 13 aircraft. The national flag carrier, however, only has 88 pilots at present. NAC has already announced that it was in the process of hiring 28 foreign pilots.

“This is a new beginning for us,” Shrestha said, adding: “We will add more international destinations to our schedule soon.”

Talking to Republica, NAC Managing Director Kansakar said that the Doha flight by the new wide-body jet marks a strategic shift in the operations of the national flag carrier. “Our Doha flight so far was focused on Nepali labor traffic flying to the Gulf region. We will now concentrating on tourism traffic,” he said, adding: “Our focus will now be on high-end tourists.”

NAC has already unveiled plan to fly to South Korea, Japan and Australia. Similarly, the national flag carrier has launched preparation to start flights to China, Myanmar and Sri Lanka, among others.

The national flag carrier has purchased two wide-body jets from American company AAR Corp. Its second Airbus A330-200, which arrived about a week ago, cannot be airborne until NAC completes all administrative formalities.

NAC took delivery of the first wide-body jet on June 28, while the second, which has been named Makalu, landed in Kathmandu on July 26.

KATHMANDU, April 20: The government has decided to stand as a guarantor for the purchase of two wide-body aircraft by... Read More...