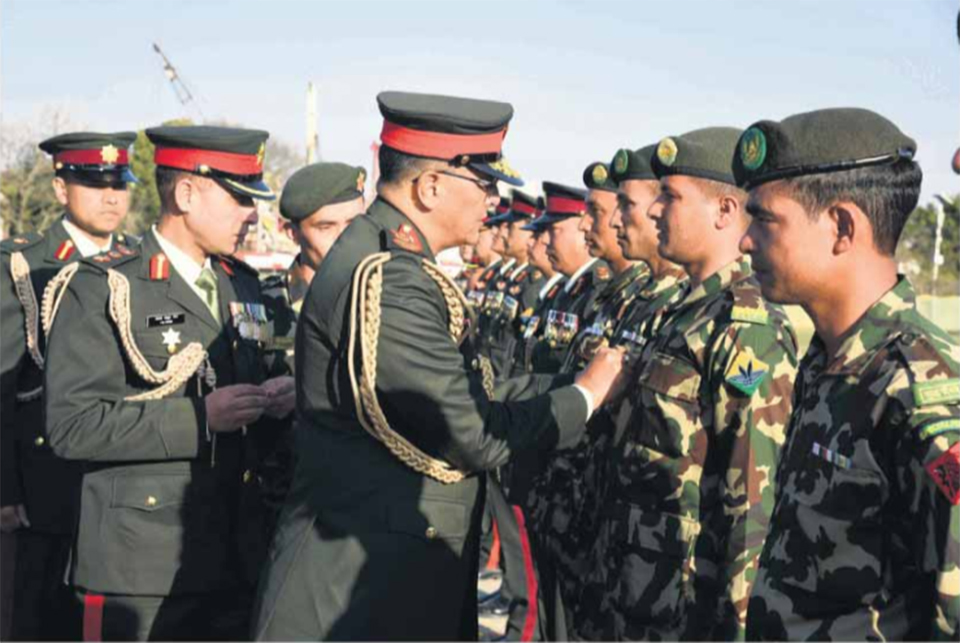 KATHMANDU, March 2: Nepal Army will be observing "Maha Shivaratri and Army Day-2075" on Monday amid a special function at the Army Pavilion, Tudikhel.

Spokesperson of the Army, Yam Dhakal, told Republica Online on Saturday that preparations are underway to observe the Army Day.

Supreme Commander of the Nepal Army, Bidya Devi Bhandari, will be paying homage to the martyrs at the "Bir Smarat" before the "Guard of Honor" by an NA troop.

On the occasion, Chief of the Army Staff (COAS) General Purna Chandra Thapa will present the colours to new battalions.

The traditional, the celebratory firing from rifles and canons, March past, military skills and drills will be demonstrated by various units and formations from across the Nepali Army, according to the Army Headquarters.

The signifying banner of Army Day 2075 and showering of flowers will be displayed by the helicopters of Nepali Army.

Various army battalions will be presenting the march-past. The Para training school is scheduled to conduct a free fall jump demonstration by experienced jump masters in two sticks with National flag of Nepal, flag of the Chief of the Army Staff and flags marking divisions of Nepali army.

Various military arts and skills will be demonstrated. Display of various arts will be followed by spectacular fireworks.

Every year, the Nepali Army observes the 'Army Day' on the auspicious occasion of "Maha-ShivaRatri."

"The Nepali Army marks Army day, reaffirming its devotion to the people and the nation, reflecting its organizational unity, characterized by patriotism and military professionalism," the Army Headquarters said.