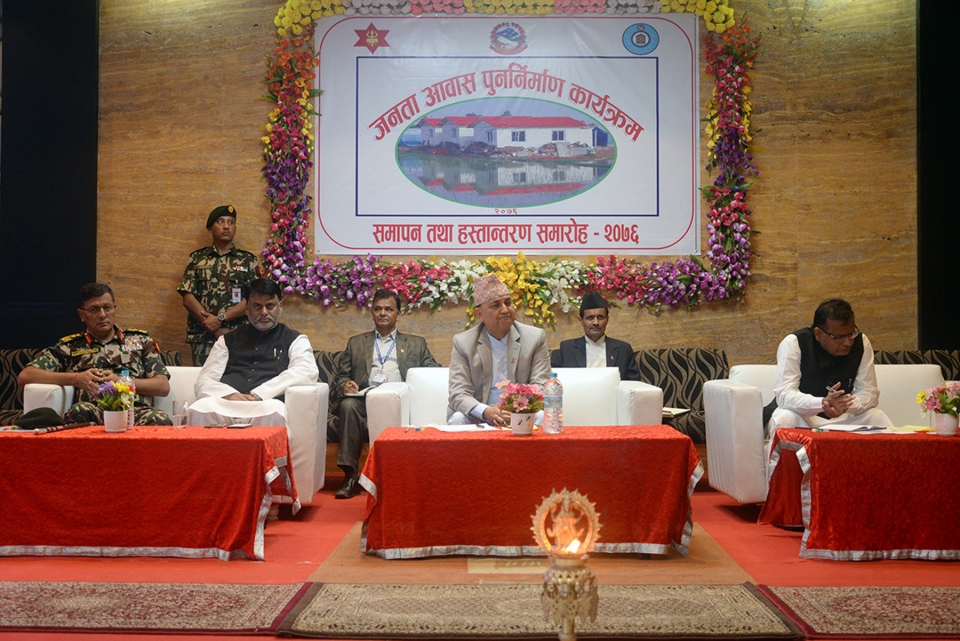 BIRGUNJ, Sept 4: Nepal Army has handed over the reconstructed houses to the families of tornado-hit two districts namely—Bara and Parsa amid a program in Birgunjon Wednesday.

Chief Minister of Province 2 Lal Babu Raut distributed ownership certificates of the houses to the mayors and chairpersons of the respective local levels.

Addressing the program, acting PM Pokharel acclaimed the accomplishment made by Nepal Army. Pokhrel also read the message sent by the Prime Minister KP Shama Oli, in which, the latter has expressed his gratitude to the Army for timely completion of the assigned duty.

CM Raut, on the occasion, thanked the prime minister, the federal government and Nepal Army for the rehabilitation of disaster-affected people in Bara and Parsa.

Speaking at the event, Purna Chandra Thapa, Chief of Army Staff thanked all the staff members of Nepal Army deployed for completing the project. On the occasion, Thapa conferred the COAS Commendation Badge to those army personnel who carried out their best performance.

As a part of People’s Housing Program, the cabinet meeting on April 4 assigned Nepal Army the responsibility of rebuilding those houses which were either damaged or destroyed during the March 31 tornado that hit Bara and Parsa killing 29 people and leaving hundreds injured and homeless. Nepal Army rebuilt a total of 869 houses; 304 in five different places in Bara and 565 in seven places in Parsa.

Though the army aimed to complete the project by August 11, heavy rain in July had affected the project.

According to the army, each house cost Rs. 0.545 million which is Rs. 11.19 less than estimated earlier. The army returned the remaining amount to the Government of Nepal.